MONGOOSE IN A HOLE BY KEILLIA MENTOR

One bright and early morning Griggs the mongoose found himself stuck in a very deep hole. 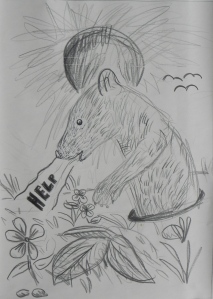 entry by Freya Platts-Costeloe to the visual arts category of Wadadli Pen 2011.

Griggs tried and tried but could not find away to get out.  He was feeling very tired and hungry.  He had been on his way
to breakfast before he found himself in this problem.  He began to worry.  Griggs muttered to himself, “I wish someone would come along to help me out.”

Suddenly, he heard footsteps of someone passing; it was Mary.  “Help, help!” he yelled but Mary did not hear him.  She went on her
way.  He waited fearfully, listening carefully for more footsteps.  A great deal of time had passed, his stomach began to growl.  He thought of the sweet fat chickens that were in Mrs. Carr’s yard.  He had been on his way there to steal one.

Oh how he wished he had not thought of the plan to steal the chickens.

Again he heard footsteps. This time he shouted with all his might.  “HELP! HELP!”  It was Insy the village pastor.  “What are you doing down there?” Insy asked.  “I was on my way to help Mrs. Carr with the gardening before I fell,” he lied.  Insy knew that Mrs. Carr was not fond of the mongoose because he had a habit of stealing her chickens.  He knew that Griggs was lying. He decided to
help him but thought of a way to teach him a lesson.  “I was just on my way there to help her as well,” he said. “Let’s go together.”

Griggs was free but wished that someone else had helped him. He had no choice. He followed Insy to Mrs. Carr’s yard.  He worked all day long looking hungrily from time to time on the fat sweet chickens that were in the yard around him. He sighed sadly.  His
plan had gone all wrong.

Keillia Mentor, third placed in the 12 and younger age category of the 2011 Wadadli Pen literary arts Challenge, is a ten year old Grade five student of the Buckley’s Primary School. She is vibrant, friendly and quite imaginative.  Keillia loves music as much as she loves reading. A member of the Le Chateau D’or Music Academy, she plays the guitar, recorder and pan. She spends a great deal of time reading and writing stories. She especially likes Anansi stories.  Keillia is often found on a quiet day with a book.

Comments Off on MONGOOSE IN A HOLE BY KEILLIA MENTOR