THE LEGEND OF BANANA BOY BY CHATRISSE BEAZER

Now this is a story passed down for many generations. All Caribbean children know or should know the story of Banana Boy. Parents used this legend to show their children that they should always stand strong in the face of trouble, but, as generations went by, modern parents stopped sharing the story with their children because they felt that it did not make any sense. However, this
grandmother thinks it her duty to tell her grandchildren the story…

“Hey! Why all this noise inside da house nuh?” she said, exasperated. “Lack off that loud radio, Johnny! Yes! That’s what I said. Sean and Shari, you waiting on me to tell you come off too? Keisha turn off the T.V right now.”

“But Grandma, the best episode of Hannah Montanna coming on now,” Keisha complained.

“You want a real story? Come sit down with me on the floor right here,” Grandma said. They all went and sat down by her rather reluctantly.

“Now let me tell you a real story, not no Hannah Montana or any of dat mumbo-jumbo,” she snorted with a disgusted face. “I’m going to tell you a legendary story, a heroic story, a fantastic story passed down for many, many generations,” she whispered.

“What is it? What is it Grandma!” The children exclaimed in excited voices.

“The Legend of Banana Boy!”

“Oh Grandma!” the children laughed. They were rolling on the ground holding their sides.  Johnny even had some tears in his eyes.

“But a what is dis? Is joke you think ah joking? No my children, it’s a real serious thing,” she declared with a deadly serious face.

The children stopped laughing when they heard her tone of voice.

“Tell us the story Grandma,” Sean said in a hoarse whisper.

“Well listen up real good,” she said holding back an amused smile.

Now it was back at that time when things were hard in Antigua. One Miss Nallie had eight children. Four boys and four girls: Latisha, Latoya, Lamira, Lamara, Dejon, Damon, D’Sean and Damar. All of them were either young adults or teenagers except little Damar who was four years old and five years apart from the second last child. Now Damar had always been different. For one
thing, he always walked around with a banana in his hand. Miss Nallie could never understand it but after a while she just accepted it saying “At least it good for him”. Damar always tried to be noticed by his sisters but the most he would get was a pat on the head. His brothers just brushed him aside as if they didn’t have any time for him. For it was back in those times when children had
to work hard running errands, doing field work or doing housework to get a little money to help the family out. Poor little Damar, nobody had the time to notice him during the day.

However he always looked forward to night time when his mama would tell him an exciting story out of her head before she sent him off to sleep. How he wished that he could be like those brave, superhero boys in his mother’s stories but little did he know that his actions would make him just like one of them.

“Who will be my friend?” he wondered as he walked cautiously to school, gripping a banana in his hand.

Damar was a very lonely child at school. He certainly didn’t know how to make friends with the new faces around him. By the second week, most children called him “Banana Boy” and never bothered to find out his real name just because of his love for bananas.  So he was very surprised when a girl by the name of Natasha spoke to him.

“Hi, what’s your name? You always by yuhself,” she said with a big smile.

“Why you talk so soft ah?” she said again and laughed.

He decided that the safest thing to do was to laugh as well.

“Is how come you always have a banana?” She asked and pointed at the banana in his right hand.

“Is how come you ask so much question?” Damar said.They both laughed.

“Bananas are my favorite,” he said to her as they walked back to class.

From then on Natasha was the only friend Damar had but she was his best friend. The two soon became inseparable and they always stood up for each other no matter what. Natasha and Damar were not very popular especially with the taller boys. Both of them were short but they always managed to wriggle themselves out of tight situations with the “baddest bully” Duffman. He threatened that he would get even with them the next time. Damar and Natasha would normally run away laughing without a care in the world. However, they did not know that the next time would stay forever in their minds.

This turned out to be a few days later. It was lunchtime and Damar and Natasha were playing catch-a-man, freeze-a-man and all the games they could remember. Their classmates were excitedly engaged in the game dodge ball. Everyone
was enjoying the games when they heard the heavy footsteps of the 6 foot Duffman coming towards them. Duffman had set out to pick a person for bullying for the afternoon.

“Children like peas,” Grandma said in an excited voice. “Nearly all of his class was running in every direction, as fast as they could.

“Let’s go!” Damar shouted as he grabbed Natasha’s hand and ran. The sound of pounding footsteps around him sounded just like his heart at that moment. As Duffman raged about, he suddenly spotted Damar. He remembered the
pathetic Banana Boy that dared to laugh at him.

“Hmph, think he can laugh at me. Ah go fix him,” he said to himself.

Duffman pounded after Damar and Natasha with great speed. At that moment, with Duffman right behind him, Damar tripped and fell over a stone.

“What happen next Grandma?” Johnny said urgently as Grandma paused for a bit.

Johnny’s mother said from the hall, “I can’t believe you’re actually telling them that foolish story. I think…”

“SHHHH!” the children said in unison.

Grandma smiled, “Now where was I, oh yes…”

Before Damar could scramble to his feet, Duffman lifted him in the air by his collar and said, with a harsh laugh, “You think you cyan say no to the Duffman and get way wid it likkle boy?”

“Put him down! NOW!” Natasha screamed from down below kicking and hitting Duffman with her small fists. By this time everyone had stopped running and was watching the scary scene. Damar tried his hardest to think of a way out but he was too scared to think straight. Then something happened that erased all fear within him. Duffman more annoyed than hurt by Natasha’s constant beatings, kicked out and sent Natasha flying across the field. There was an audible gasp than rippled through the onlooking crowd.

At that moment Damar, who was dangerously angry felt a surge of electricity run through his body. Then his little muscles grew and filled up the space in his once big uniform. He then delivered a hard punch to Duffman’s nose. Duffman reeled back at the impact and dropped Damar to the ground. As Duffman got back on his feet Damar gave him one last blow to the stomach that
sent the bully tumbling to the ground.

A cheer went up from the crowd when they came out of shock, when they realised what happened. Damar watched his arms go back down in total amazement. Natasha came running up to him with a smile on her face.

“Is a good you eat so much banana,” she said.

“How you know is dat?” he asked, shaking his head at her. He thought she was just being the regular know-it all Natasha.

“Because look,” she said, pointing to his right arm. There, imprinted on his arm was the picture of a small banana.

“From then on, no one ever took advantage of Damar or Natasha. And Duffman certainly never bullied anyone again,” Grandma said.

“Yayy! Banana Boy!” the children shouted and danced around their Grandmother.

The Legend of Banana Boy was written by 16-year-old Chatrisse Beazer, adjudged top pick in her age category – 13 to 17. The New Winthorpes resident is a Wadadli Pen regular having twice won honourable mention in the 12 and under age category, 2005 and 2006 for A Scary Night and The Rescue, respectively. The fifth form Princess Margaret School student says reading has
always been her favourite hobby and that she has developed a love for writing as well. When this year’s competition was announced, she was a bit reluctant to enter because she was not accustomed to the theme presented, however, after encouragement from her mother, she wrote of The Legend of the Banana Boy. 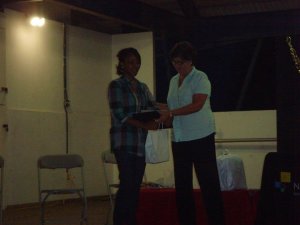 Good thing too, considering that in addition to winning 13 to 17, she was also selected as the third placed writer overall in the 2011 Wadadli Pen Challenge.

Comments Off on THE LEGEND OF BANANA BOY BY CHATRISSE BEAZER