Keva Margetson was an iconic character whose vibrant spirit impacted so many areas from Vitus (the first Catholic mas in the region and its related Cultural Performers reinvigorating and recording traditional Antiguan and Barbudan mas and music)  to corporate communications as a PR dynamo for major clients like (current Wadadli Pen sponsor) ABI; education with initiatives like the ABI Career Affair to Independence; and, as a founding member and first president of the Professional Organization for Women in Antigua and Barbuda, she was an advocate for women and the protection and empowerment of young girls. She wore her love for Antigua on her (puffed and madras’d) sleeve, 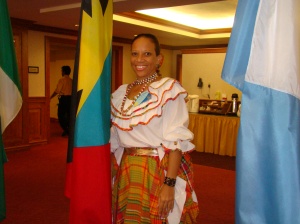 brought relentless energy to everything she undertook, and was generous towards other women-becoming (I know). With her passing, Antigua and Barbuda lost an agent of change and many women lost a sister, friend, and mentor. Well, her sisters in the Professional Organization for Women in Antigua and Barbuda established a scholarship in her name, extending her legacy.

Per their site(http://powaweb.com/powaanu), “The scholarship is open to women who are pursuing tertiary education in Education, Marketing, Public Relations, Communications or Culture ( e.g. Fine Arts). The maximum value of the scholarship is EC$5,000.00 and will be awarded once annually.”

The original May deadline has been extended to June 30th… and I’m just passing it along (as someone who admires both Keva and the work that POWA does)…if you’re a young Antiguan-Barbudan and you’re pursuing studies in any of the named fields, visit the site and learn how to apply.