He woke up and it was snowing. He could see a heavy dusting of the white powder on the double glazed windows that peered out the roof of his cold attic apartment. He went outside, confronted with this alien, yet strangely romantic landscape. Unlike home, where the mango and dumps tree would be full of fruit, the trees here are silent, empty, with just a covering of snow to hide the nakedness of their exposed branches. The skies were grey. He walked up the hill (otherwise referred to as “Bitch Hill” by students who were less than enthused about having to walk to its’ summit) towards the school. Dubbed “Hogwarts” for its mystical appearance, the giant stone castle looked even more grandiose than usual with a layering of snow covering much of the roof. With his pair of new, cheap gloves on his hand (only a pound at Poundland! Bargain!) he dug them into the snow and came up with a handful. Curious, he brought it towards his face, examining it in minutiae, memorising the look and texture. Then he brought it towards his mouth and flicked his tongue over it. Cold, bland, nothingness. A far cry from the ducana, saltfish and chop up that would probably be on his plate at around this time back home. A bit disappointed, he dropped it back on the ground.

He looked left and right, all around, making certain that no one was in sight. Not fully convinced that there wasn’t anyone looking through the various windows, he decided to do it anyway. He flopped onto his back into one of the piles of snow, his arms and legs working their way up and down. After a few seconds he got up to admire his work. It looked different from what he had seen on the various films that aired every year around Christmas.

“When I get back to Antigua, I’ll try this in the sand” he thought to himself.

He looked out at the distance to the harbour. The sea was a glazed white sheet laid out in the distance, a far cry from the blue-green sparkling water he was accustomed to seeing and had indeed grown bored of. Just for a minute, he wanted to be back home. To breathe in the warm air and feel the sun beating down on the back of his neck. He wanted to be somewhere that he did not have to move his bed next to the radiator on the few hours he was allowed it on to stop shivering. He wanted to taste roast corn, sorrel and ginger beer, and not have to explain where “Antigua” was on the map. Just for a few minutes, to be back home!

Then he started the slow, quiet walk back down the stairs etched in the hill, back home to lie on his cold bed and stare out at the greyness while the frosted tears rolled off the cheeks of the sky. 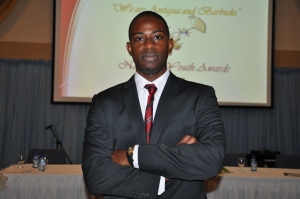 AUTHOR BIO: Born and raised in Antigua and Barbuda, Daryl George has always had a passion for literature. He attended the Antigua Grammar School, the Antigua State College and the University of the West Indies, graduating with a degree in Psychology; and recently completed a course at Bangor University in Consumer Psychology with Business. He works as aYouth Officer at the Department of Youth Affairs. His story, Snowcone Melancholia, which earned Honourable Mention in the 18 to 35 age category of the Wadadli Pen 2012 Challenge is about a young man musing over the differences, both real and perceived, of his experiences both at home (Antigua) and abroad while watching his first snowfall.

Comments Off on Snowcone Melancholia by Daryl George