The Yard by Aarati Jagdeo

Days in Antigua run the gamut from pleasantly warm, to suffocatingly humid, to scorching hot. Lorraine was accustomed to those. Today, however, was like no other. Today was the kind of day that made you believe the hole in the ozone layer was hovering above you. To make matters worse, she felt every inch of her sweat-drenched uniform clinging to her body and then, there was the issue of her knapsack; the book-laden burden on her back. It wasn’t fair. She never saw adults struggling with heavy books and they were grown.

She was getting closer to Corrine’s house now. Corrine was in fourth form and lived in the biggest house on the street. Her mother had married Mr. Neeson and moved in with him two years ago. Since then, (people said) Corrine started to act “nuff”.  Lorraine didn’t know Corrine personally but had no problem believing the rumours about Corrine’s attitude. All those butterskin girls had an attitude as far as she was concerned. Combine that with her newfound status as Mr. Neeson’s step-daughter? Hah! Nuffness will abound!

Mr. Neeson had an impressive backyard. However, it was one that Lorraine had grown to hate. If she were able to walk through it, she could shave off at least four minutes of walking time to her house.  Four minutes which, in this heat, was a matter of life and death. As she walked past their wooden fence, Lorraine noticed two planks lying in the street. The hole created by their absence was just large enough for her to squeeze through.

She looked around to see if anyone was looking then bent down and slowly went through the hole. She was careful to not rip her uniform on any nails or splinters. She looked over to the other side at the hedges and then glanced at the house. The windows were massive but so were the curtains. She would just have to walk briskly.  Lorraine began her trek across the freshly mowed lawn praying that no one would visit the backyard.

Out of the corner of her eye she saw movement. Without thinking, Lorraine hid behind a lawn chair. She saw Corrine in her room, sitting on her bed reading. Then, Mr. Neeson came in.  He closed the door and said something to her which made Corrine stand up and go close to him. He started stroking Corrine’s face.  Corrine didn’t look at him, not even once and her body stiffened. He grabbed her roughly and kissed her on her mouth. It was like those kisses Lorraine had seen in the movies except this one seemed angry and loveless.

Corrine’s body stayed stiff. Not even her hands twitched. Mr. Neeson pulled away from her and gave her a long, disapproving look. Corrine’s eyes didn’t leave the floor. He never stopped looking at her as he unzipped his pants. It was when he took Corrine’s hand and put it there that Lorraine began to run.  She wasn’t sure whether it was sweat or tears pouring down her face when she got to her house.  Once inside, she went straight to the bathroom and locked the door, ignoring her mother’s greetings.  She ran cold water in the sink and doused her whole head with it. She was sobbing loudly now.

Lorraine’s mother banged on the door concerned about her daughter’s state. She didn’t want to open it but it soon became clear that her mother was not leaving. Lorraine unlocked the door and sat on the toilet. Her mother came in and stood over her. 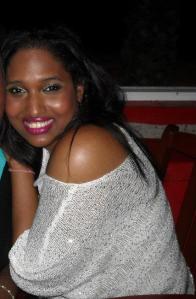 Arati Jagdeo describes herself as “a Caribbean girl living in a material world. I like chillin’ like a villain, kickin’ it old school, shootin’ the breeze and any other activity that involves an apostrophe.” Her entry, The Yard, which earned her second place in the 18 to 35 age category of the 2012 Wadadli Pen Challenge is about how a young girl, in an attempt to escape the heat, takes a shortcut through her neighbour’s yard and sees something she’ll never forget. It is, said the chief judge, “scary without going over the top”. The Yard also earned her third place overall. In her other story, Thirty-Six Hundred, which earned third place also in the 18 to  35 age category, a young woman laments her father’s indiscretion as well as the state of her now devastated family.

Comments Off on The Yard by Aarati Jagdeo