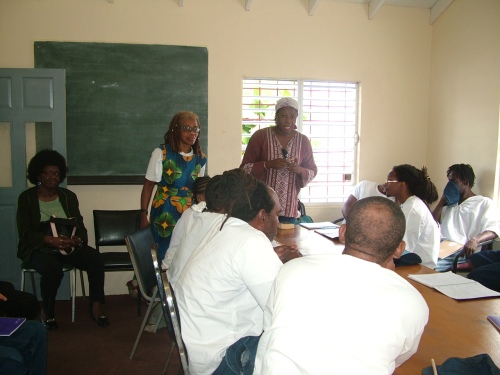 This past week I had the mixed pleasure of participating in and covering the last session of the creative writing group at Her Majesty’s Prison. I say mixed because it’s always a little sad when someone’s life takes them along the path that leads to prison but it was also inspiring seeing the courage and talent on display as these men and women find their voice, and, hopefully, a new path.

I’ve just finished reading the collection that was produced by facilitator Brenda Lee Browne, the workshop participants (15 incarcerated men and women), and the organizer, the Directorate of Gender Affairs. I want to tip my hat to all of them. The collection isn’t available for sale and while I can’t re-produce the entire collection here, I will share some things that stood out.

First to endorse the strong words in support of the collection by the tireless advocate Craig Rijkaard of Gender Affairs though I was not like him present for any of the sessions before the final one: 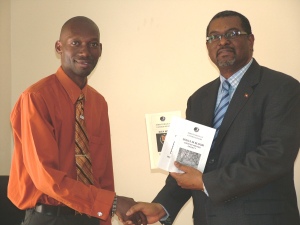 “We are pleased to be associated with the production of this booklet of writings Idea No. 1, and the overall development of this project. As we continue to promote gender equality, equity and women empowerment this project demonstrates our commitment to such…I have personally sat in the sessions and have watched inmates developing Idea No. 1 with words such as curious, hot, hungry, pure, more work, and good to where they listed areas in which there is struggle: spirituality, independent, faithfulness, situation, music, corruption, neutral, favouritism, circumstance and bad mind. Well done guys and gals your hard work over the past five weeks have paid off. Keep up the good work!!!”

In the stories, especially, you get a hint of the philosophyand hard luck story that could lead someone down the path that leads to prison….

“The real McCoy – no joke that was him, you see Roy was in this thing, this life to win and by all means necessary…” (DO)

“I grew up very hard and I have three sisters and one half-sister on my father’s side. They used to beat me as I am the smallest child for my mother and father…School was also hard for me as I used to fight a lot and dropped out … I ended up at the boys’ training school …I was mixing with the wrong crowd and they were into bad things like drugs and guns and this is how I ended up in jail.” (DO)

Lines like “All in all I have come to jail four times for the same thing and despite my troubles God is good all the time” reveal a sense of acceptance of circumstances balanced by hopefulness steeped in faith. In fact, the only thing that rivals religious references and tales of hard luck circumstances for prominence in the book is the analogous link between the prison of prison and the prison of the plantation. Then, not surprisingly, there is the idealization of freedom:

Very real crimes landed these people in prison and society fears and condemns them for it – and who can blame us – but in programmes like this, there is a path to redemption. So, without romanticising the experience…

“He is a poor man trying to find a way to better himself.”  (JE)

I can’t help but wish them better, better choices, better paths in future. 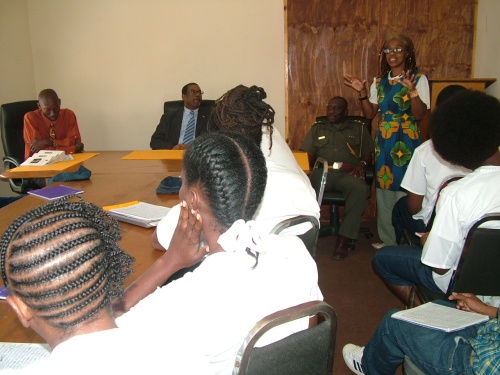 Oh, and note to the powers that be, give this currently volunteer programme the funding  it needs and frankly deserves.

*1735 is the short hand, i.e. colloquial name, of Antigua and Barbuda’s prison, which has a big red gate as its main entrance.

Filed under A & B Lit News Plus, Literary Gallery