Gayle Gonsalves’ stories have appeared in The Bluelight Corner, In the Black and So the Nailhead Bend, So the Story End. Painting Pictures and Other Storiesis her debut book, featuring eight short stories.

In the past, she had a column on female issues at the Guyana Chronicle; she was the editor at Caribarena and a judge at the Annual Independence Literary Festival. Gayle has a Bachelor of Arts degree from York University in Toronto, Canada, where she lives and writes.

Painting Pictures and Other Stories features eight stories of discovery, betrayal, and passion. The book depicts the emotional turmoil that results from decisions: a little girl who migrates to Canada on a hot August day is flabbergasted to discover there’s no snow; a graphic designer leaves her husband each morning to meet her lover; an inconsolable heartbreak leads a woman to the brink of sanity as she desperately wanders city streets seeking answers in dark places; a young woman gives a touching eulogy to the woman who raised her; a wife is torn between her love for her husband and his brother; a college graduate moves across the country to keep a secret and recover from the lover who abandoned her, only to meet him again; a young woman experiences the joy of first love, its passionate awakening, and the moment when it’s questioned; and three women bond while shopping for dresses for their fictional weddings.

Note About the Book:

In her own words: “This book features a variety of stories that I wrote over a long time span. Clarissa’s Letter is the first story I wrote, albeit it slightly resembles its original form but the thread and the theme are there. My first published story was Tamarind Stew, and it holds a very special place for me because it solidified my dream of being a writer, and it was truly gratifying to see my work in print. Then there were years when I didn’t write and upon my return to creative writing, I re-found my voice, with a more mature sound, and in new stories. They came to life in several pieces in the book such as Painting Pictures and A Good Woman.

“One of my creative writing teachers once said, ‘writers write to be read,’ and I found the publication of this book brought those words back to life.”

A Good Woman in In the Black, edited by Althea Prince, 2012

Jumbies Don’t Sleep in So the Nailhead Bend, So the Story End, edited by Althea Prince, 2013 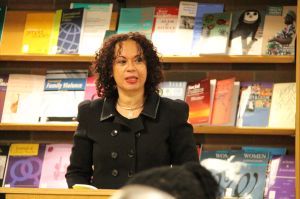 Gayle reading at the launch of So the Nailhead Bend, So the Story End in Canada.

Painting Pictures and Other Stories, 2014

An Antigua launch of Painting Pictures is expected to take place at the Best of Books on the evening of July 5th 2014.