As with all content (words, images, other) on wadadlipen.wordpress.com, except otherwise noted, this is written by Joanne C. Hillhouse (author of The Boy from Willow Bend, Dancing Nude in the Moonlight,  Fish Outta Water, and Oh Gad!). All Rights Reserved. If you enjoyed it, check out my page on Amazon, WordPress, and/or Facebook, and help spread the word about WadadliPen and my books. You can also subscribe to and/or follow the site to keep up with future updates. Thanks. And remember while linking and sharing the links, referencing and excerpting, with credit, are okay, lifting whole content (articles,  images, other) from the site without asking is not cool. Respect copyright.

I saw in the paper the other day a call for local artist/es to register with the Culture Department. I’ll admit I had mixed feelings when I saw this.

On the one hand, having a registry of artistes could potentially mean opportunities for artistes if the Culture Department means to be proactive about it and to use this registry as an active network and not names on a list in a rusted file cabinet somewhere. I wasn’t optimistic. There was a similar call some years ago and I went in and filled out the forms and, as far as I know, nothing has come of that. In  fact, any opportunities I’ve accessed to travel and participate in literary events have either come at the invitation of the person or persons putting on the event or at my own initiative – sometimes both. My efforts to inform of my participation in such activities or to propose programmes which could put my skills as a writer and editor, writing coach and workshop facilitator to use have largely gone unanswered as if sucked into a black hole of nothingness. I’m not sitting on my hands waiting for things to happen, I continue to be proactive from Wadadli Pen to the Jhohadli Writing Programme to the arc of my own career as a writer – stumbling through the disappointments but *knock on wood* still standing. It would be nice though if there was more infrastructure to support the efforts of artistes or even just more assistance in accessing opportunities – that void is part of my reason for creating the Opportunities page on this blog; and this blog (dedicated to the Wadadli Pen programme in support of the literary arts in Antigua and Barbuda, and including in addition to news and views, and various literary treats, the only online bibliography that I’m aware of our literary arts in the 268) and my personal blog have been all about sharing what I continue to learn.

But if the Culture Department is stepping up in this way, that’s good, right?

So, on the optimistic side, I decided to reach out to the person listed in the newspaper ad, Mr. Gilbert Laudat, to find out their intentions. He explained to me that there are grant funding opportunities available through the Organization of Eastern Caribbean States but they want groups seeking to access these opportunities to be registered with the Culture Department. That information will be available to the OECS but also to the Culture Department locally (I think he’s saying as a physical book – of some 100 copies). “It will mean more support for artists,” Laudat said, in terms of accessing technical and financial grants. It will mean, he said, being in a position, as well, to request public funding from (or is that through) the Culture Department. He also touted the benefits of things like free movement with endorsement from the Culture Department as a registered artiste. He acknowledged the fractured nature of the relationship between the Department and the artistic community but was hopeful that this initiative marked a new beginning.

“Without cultural practitioners, we at the Culture Department cannot do our work,” he said.

Well, he’s saying the right things, and I suppose we will just have to see if the words are backed up by action. I plan to register both myself as a writer and the Wadadli Pen programme, and, well, we’ll see what happens.

Among the things I would like to see happen are …

…and those are just off the top of my head.

To register, and presumably access the available opportunities, write a short bio of about 200 words and submit to specialeventsdepartment.culture@gmail.com,  subject line ‘Arts Registry’.

So far, the response has been very good, according to Laudat, with about 30 registered to date – primarily visual artists and craftspeople, a sprinkling of writers and musicians.

I’ll end this post with some images (selected at random from the Wadadli Pen blog photo archives) of activities of our arts community:

Coconut Man by Glenroy Aaron, part of the Tongues of the Ocean special Antigua and Barbuda issue for which I served as guest editor. http://tonguesoftheocean.org/

One of the first major regional literary panels I was asked to be a part of – after reaching out to them – the BIM forum celebrating Caribbean Women Writers, 2008. The man in the mix is legendary Caribbean writer George Lamming.

Reading an excerpt of my forthcoming manuscript which took second place for the Burt Award for Young Adult Caribbean Literature at the Bocas Lit Fest in Trinidad, 2014.

Margaret Irish – winner of the Lead by Example Teachers Prize collects her gifts courtesy Caribbean Reads Publishing and plaque sponsored by Joy Lawrence. This prize was added to Wadadli Pen as a way of encouraging students by encouraging teachers. 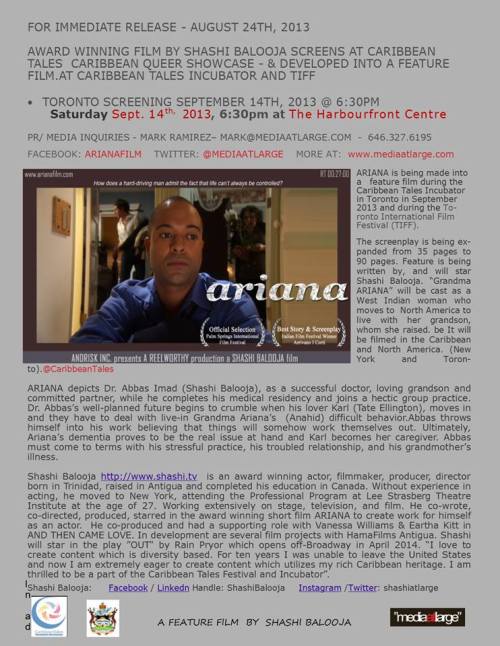 Antiguan-bred, US-based filmmaker Shashi Balooja and his film Ariana which, the last time we spoke, he discussed doing as a feature partially-based in Antigua. 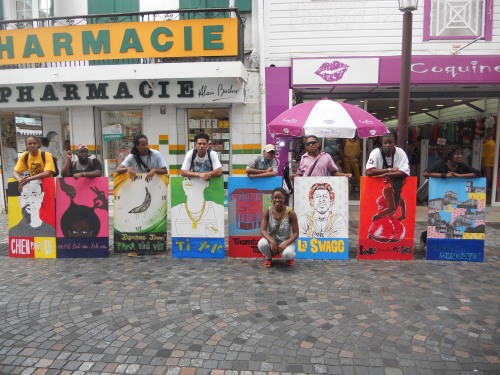 This is Barbados, not Antigua, but is one of those cool examples of taking art into community spaces. Sweet Gossip.

Linisa George, shown here accepting her 2012 National Youth Award for contribution to the Literary Arts, has been active in the literary arts as part of Women of Antigua (producers of the Vagina Monologues and When a Woman Moans), in August Rush (which produces, among other things the Expressions Poetry in the Pub and the Young Poets Society of Antigua and Barbuda), in addition to representing Antigua and Barbuda during the Poetry Parnassus adjacent to the Olympics, in a poetry series featured on the BBC, and more. She is publisher of Black Girl in the Ring online mag.

Here I am at the 2012 launch of my book Oh Gad! with veteran calypso writer Marcus Christopher. 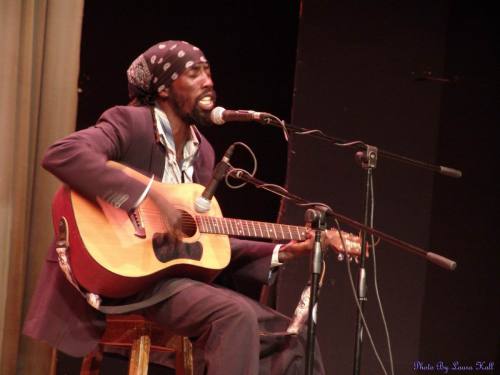 Promise No Promises is in the news currently with new releases. Here he is performing at the Star Antigua show, one of the arts initiatives that have come and gone over the years.

Art show at Studio One, a showing by students of Mark Brown, a talented artist in his own right. Shown are Shem Alexander’s Paper Trail and Yashide Auguiste’s Captive. Alexander was the 2010 Wadadli Pen visual arts award winner. 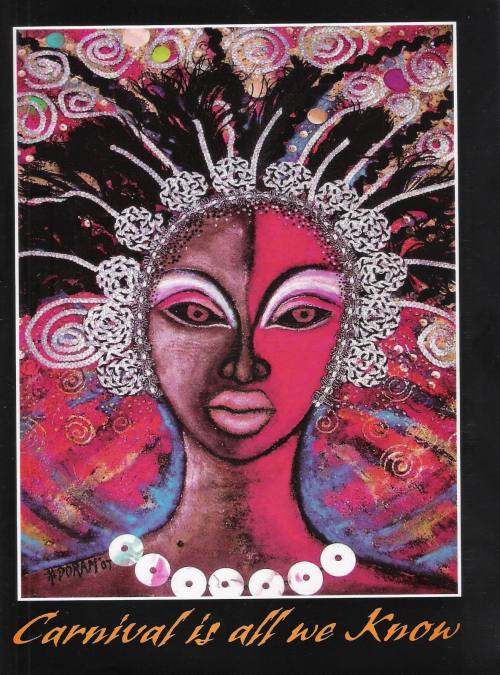 A publication I produced for Daily Observer to mark the 50th anniversary of Carnival and featuring various Carnival arts including this cover design by famed artist and costume designer Heather Doram.

The productions of Women of Antigua stand out as a watershed moment in theatrical activism in Antigua and Barbuda.

Dr. George Roberts composes music for worship that reflects us. He gave an interesting presentation on his involvement in music during the launch of the 2014 Antigua and Barbuda Review of Books.

Work produced by Nicoya Henry during the 2011 Sidewalk Art Festival while still a student. Opportunities to pursue art fellowships and residencies is one way I think we could do more to help promising arts. 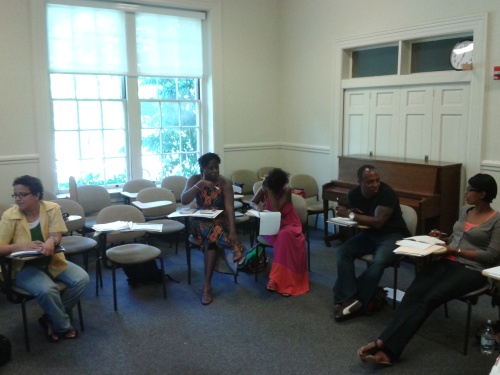 Sometimes we have to travel to grow. Here I am participating in the Callaloo Writers Workshop at Brown University in Rhode Island.

Me in NY for the 2012 launch of my book Oh Gad! at the invitation of the Friends of Antigua Public Library. 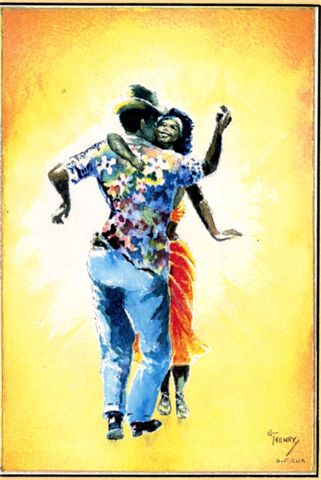 Calypso Dancers – One of my favourites from the late E. T. Henry, one of the pioneers of local art.

Antigua Dance Academy has been performing at a high standard for a very long time in spite of the limited facilities for this type of activity.

Among the many books produced independently by Antiguans and Barbudans is this book of fictional tales ripped from our folk history by Barbara Arrindell.

Wadadli PEN, nurturing and showcasing the literary arts in Antigua and Barbuda since 2004…but it hasn’t been easy.

Joy Lawrence’s research into Antigua and Barbuda’s folk history. How is work like this supported or encouraged? 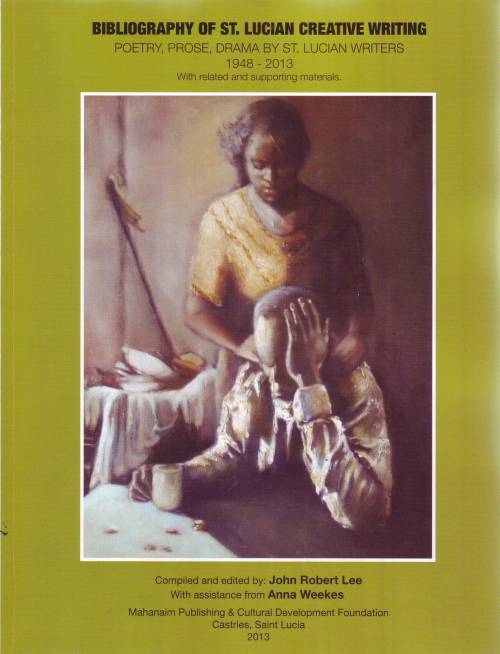 This is a published bibliography of St. Lucia’s writers – apart from the listing on this site, do we have a comparable product out of Antigua and Barbuda?

Short Shirt doing a little impromptu performance during the launch of Dorbene O’Marde’s Nobody Go Run Me (Photo courtesy Colin Cumberbatch) – Short Shirt set the standard, where is Antiguan and Barbudan calypso today? 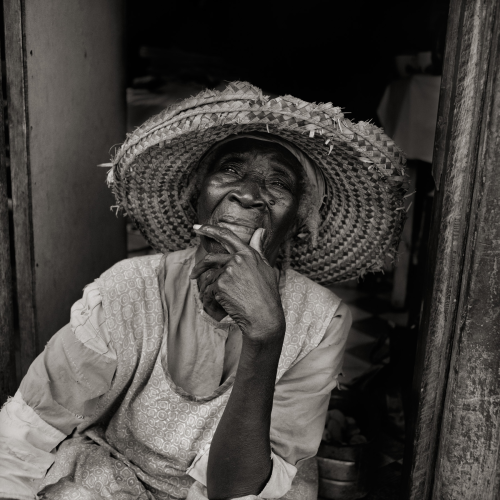 Old Woman of Bolans in Straw Hat, 1969. by photographer Margo Davis. Part of her Antigua Pride show. Which has me thinking, when are we going to get a national gallery?

The colourful group from Brenda’s first Just Write Writers Retreat. That’s her in the blue top on the right; that’s Glen who hosts the Wadadli Pen Open Mic next to her and in front of her, that’s Tiffany Smith, a finalist in 2012 – the weekend retreat was part of her prize package, contributed by one Ms. Brenda Lee Browne.

We produce all types of artists. Here I am accepting a cake from Danielle George John who designed and made this cake to mark the 10th anniversary of my programme, Wadadli Pen. 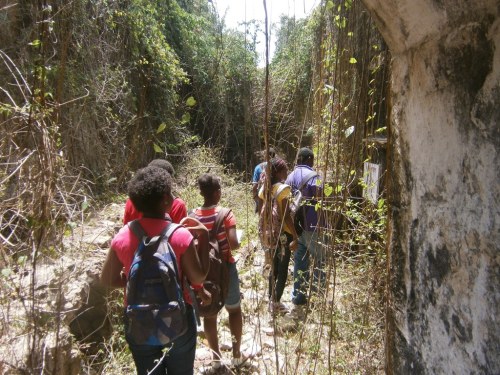 I facilitated a Department of Youth Affairs youth media training workshop over summer 2014. My second time being commissioned by the DYA to use my skills to bolster the skills of potentially another generation of journalists and writers. 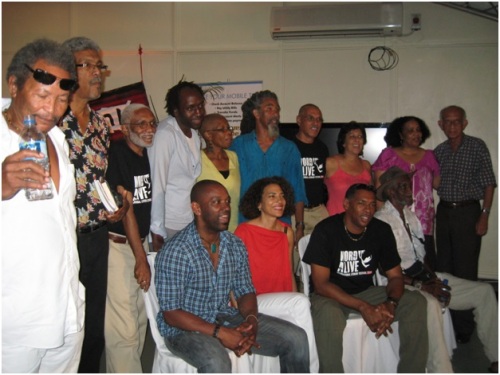 Here’s Unburnable author Marie Elena John (seated, centre) at a literary gathering with other Caribbean writers. Antigua and Barbuda needs to continue to have a presence at these types of gatherings. 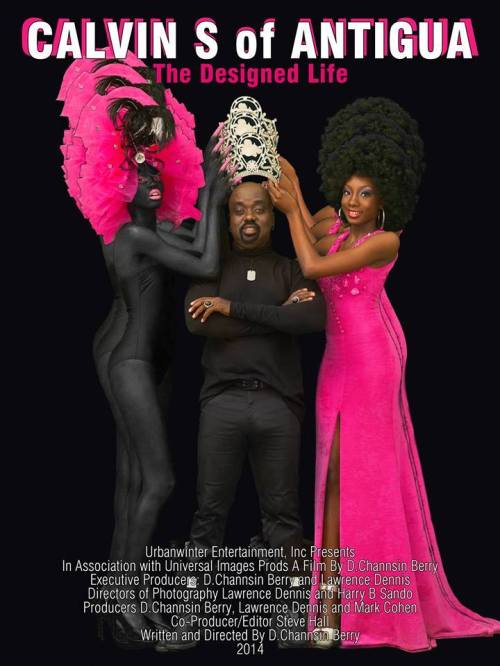 Fashion icon Calvin S was the subject of a documentary produced by D. Channsin Berry, who also produced the critically acclaimed Dark Girls. Wonder how many Antiguans and Barbudans saw this?

Filed under A & B Lit News Plus, A & B WRITINGS, Literary Gallery