Several young people saw the Caribbean Week of Agriculture’s second film competition as an opportunity to pursue their dreams while also encouraging their peers to seize the moment.

The competition, which attracted over 20 entries from around the region, had as its theme “Adding Value to Local Foods”, and invited interpretation of the theme using film and video, including animation, to communicate the role of science and technology in agricultural-led economic development.

The winners were awarded their prizes at the CWA 2014 conference, in Paramaribo, Suriname, on Wednesday.

First place went to the video The Fruit of Life by Kareem Larcher and Jelani Paul of St Lucia. In this film, viewers are invited to contemplate how wisdom, strength and perseverance can triumph over evil (in this case the murder of a great grandfather) to see the dream of developing the coconut realized to the benefit of a country.

Paul, co-director, co-writer, cinematographer and editor on the film said film-making has been “our passion for a long while.” He said he also “wanted to prove a point to ourselves and to the wider public that things can be done. We just need to take the initiative on ourselves to make things happen, because I believe right now we are at a point in time where a lot of people are losing hope and belief in themselves and the Caribbean agricultural sector.”

He is looking forward to beginning a degree in film studies in California next year.

The film’s producer, co-director and co-writer, Kareem Larcher, said, “We have always been film advocates and we love agriculture. We have been using our graphic talents and marketing skills to help farmers but more from an advertising role. We figured, when we saw the competition, why not fuse our two passions and give it a try.”

The film was an obvious winner from the start, said CTA’s Judith Francis, the coordinator of the film competition. “It had everything…It weaved the value of the coconut right through: the cross-breeding for higher quality, the fact that the coconut was used to disinfect wounds, all the value of the coconut, and it was told in such an interesting, captivating way, dealing with the science, with the added value.”

Second prize went to Breadfruit Versatile by Randy McLaren, Julene Robinson, Veronique Smith and Brian Johnson of Jamaica. McLaren, the film’s writer and producer who also played the film’s protagonist, said he decided to enter the competition “because I grew up in a rural community and I wanted to add my voice as a young creative to the message of added value to local foods and promoting food security.

“Also, in a practical sense, to say to unemployed young people and others that they can use the resources that are around them to create gainful employment or income earning opportunities. Unemployment is highest among the youth in Jamaica. I wanted a practical way to say to get up and do something. Do not wait for a company to hire you, young people without a degree and without a job.”

In the film, the protagonist is at his wit’s end seeking employment when his answer for divine guidance falls in front of him in the shape of a breadfruit. An aunty in the village encourages him to help her develop her line of “breadfruit juice”, an appetizing-looking concoction made with condensed milk. The protagonist then shares his vision with others in the community who, though cynical at first, come around to seeing the potential of the venture and join in.

Francis said the film-makers were encouraged to share their films and videos on Facebook. The result was that persons were calling McLaren’s production team asking for the breadfruit juice and others were coming around to his house to sell him breadfruit, so convincing was the production.

Third place went to Captain V by Kemar McInnis, Tannecia James, Marc James and Cleon Ewers of Jamaica. This film depicts a superhero potato who shows other forlorn vegetables the way to attract consumers and be more appealing through adding value to themselves.

Marc James and his wife Tannecia, both 29, co-wrote the video and Tannecia who is a graduate of Carimac was the video’s producer. Tannecia said, “Training was a huge component of the competition.” The competition’s organizers sent them to Trinidad in April for training in animation and video. “Those were very, very good,” she added. “The competition provided a lot of opportunities for us.”

Marc said, through the film “we are trying to tell a more interesting story visually, and trying to garner interest in agriculture.” He and Tannecia said there is now a huge opportunity for young people to get involved in agriculture using technology. “It doesn’t have to be the traditional labour-intensive work.” 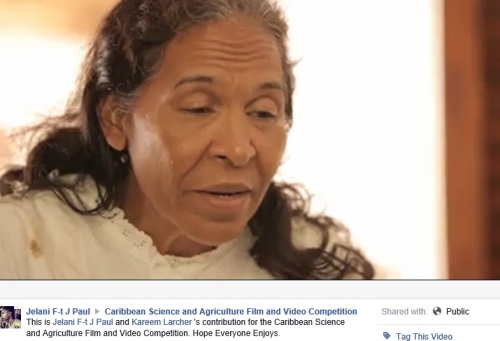 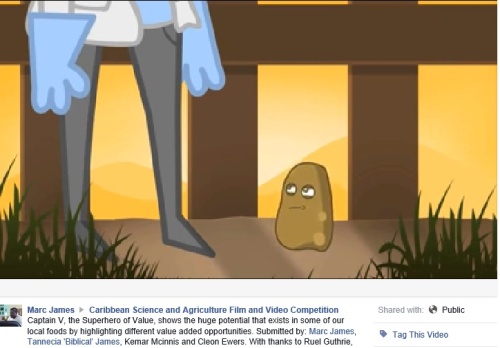 Special prizes are awarded to:

The viewer’s choice is awarded to: 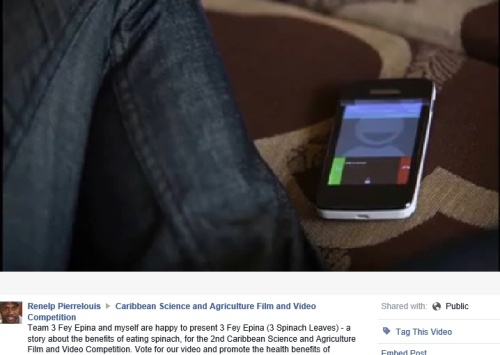 This is from Panos Caribbean. Congratulations to the winners.