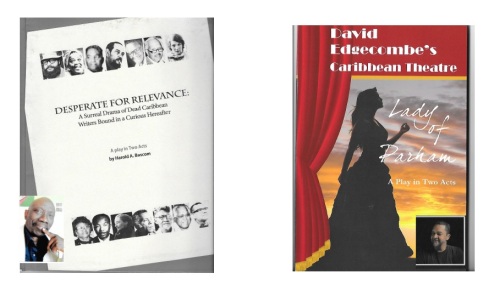 The Edgecombe play (image to the right) is based on an Antiguan legend and set in Antigua; it is published by CaribbeanReads.

The Management Committee of The Guyana Prize for Literature announces the Shortlist for the 2014 Caribbean Awards in Fiction, Poetry and Drama. The Caribbean Award, inaugurated in 2010, is open to writers who are citizens of any Caribbean territory. The Shortlist was decided by the Jury, an independent panel of writers, critics and experts in the fields of literature, drama, culture and the arts: Dr Stewart Brown (Chairman), Reader in the Centre of West African Studies, University of Birmingham, UK; internationally acclaimed poet, artist, editor, anthologist and critic; Rawle Gibbons, foremost Trinidadian and Caribbean playwright, theatre director, researcher in cultural studies and traditions, drama anthologist; Prof Jane Bryce, published prose writer, Professor of Film and Literature, UWI, Cave Hill, Editor of Poui Cave Hill Journal of the Arts, lecturer in Creative Writing, and critic. The winners will be announced at the Awards Ceremony in Georgetown on November 29. The Shortlist are accompanied by the way Jury described each title.

SHORTLISTED WORKS in alphabetical order for each category
Best Book of Fiction:
a) David Dabydeen (Guyana/UK) Johnson’s Dictionary (Peepal Tree)
In a novel set in 18th century London and Demerara, that might be dreamed or remembered by Manu, a revenant from Dabydeen’s epic poem, Turner, we meet slaves, lowly women on the make, lustful overseers, sodomites and pious Jews – characters who have somehow come alive from engravings by Hogarth and others. Hogarth himself turns up as a drunkard official artist in Demerara, from whom the slave Cato steals his skills and discovers a way of remaking his world. David Dabydeen’s novel revels in the connections of Empire, Art, Literature and human desire in ways that are comic, salutary and redemptive.

b) Barbara Jenkins (Trinidad & Tobago) Sic Transit Wagon (Peepal Tree)
The stories in Sic Transit Wagon move from the all-seeing naivete of a child narrator trying to make sense of the world of adults, through the consciousness of the child-become mother, to the mature perceptions of the older woman taking stock of her life. Set over a time-span from colonial era Trinidad to the hazards and alarms of its postcolonial present, at the core of these stories is the experience of uncomfortable change, but seen with a developing sense of its constancy as part of life, and the need for acceptance.

d) Ingrid Persaud (Trinidad & Tobago) If I never went Home (Blue China Press)
Ingrid Persaud’s debut novel explores the idea that sometimes the only way to find your real home is to leave the one that you know. Written in two distinct, alternating voices, If I Never Went Home follows ten years in the turbulent lives of two narrators – thirty-something Bea, an immigrant in Boston, and ten-year-old Tina in Trinidad – as they separately navigate devastating losses, illness and betrayal in their quest to belong. Moving back and forth from the present to the past through flashbacks, this is the powerful story of how these women unearth family secrets that go beyond anything they could have imagined.

e) Elizabeth Walcott-Hackshaw (Trinidad & Tobago) Mrs B (Peepal Tree)
Loosely inspired by Flaubert’s Madame Bovary, Mrs. B focuses on the life of an upper middle-class family in contemporary Trinidad, who have, in response to the island’s crime and violence, retreated to a gated community. Mrs. B (she hates the name of Butcher) is fast approaching fifty and her daughter Ruthie’s return from university and the state of her marriage provoke her to some unaccustomed self-reflection. Like Flaubert’s heroine Mrs. B’s desires are often tied to the expectations of her social circle. Elizabeth Walcott-Hackshaw writes with wit, insight and warmth for her characters but is also brutally honest about their foibles and delusions.

Best Book of Poetry:
a) John Agard (Guyana/UK) Travel Light Travel Dark (BloodAxe Books)
In Travel Light Travel Dark John Agard investigates the intermingling strands of Caribbean and British history. Cross-cultural connections are played out in a variety of voices and cadences. Prospero and Caliban have a cricket match encounter, recounted in calypso-inspired rhythms, and in the long poem, ‘Water Music of a Different Kind’, the incantatory orchestration of the Atlantic’s middle passage becomes a moving counterpoint to Handel’s Water Music.

b) Edward Baugh (Jamaica) Black Sand (Peepal Tree)
Black Sand brings together poems selected from Baugh’s two previous collections, with a collection’s worth of new poems. Baugh’s subject matter ranges wide: race, history, cricket, love, the academic life, the consolations of natural beauty and shrewdly analytical eye for a Jamaica that includes the worlds of urbane polish, gated communities, religious enthusiasm and a black majority still struggling to overcome the wrongs inflicted in the past.

c) Vladimir Lucien (St. Lucia) Sounding Ground (Peepal Tree)
Sounding Ground is a collection that is alive with tensions: between divergent family visions of respectability and revolt, tradition and modernity. It is enriched with stories of ancestors, immediate family, the history embedded in the language choices of a St Lucian writer, reflections on the submerged belief system of Tjenbwa, and heroes such as Walter Rodney, CLR James and a local steel bands man. d) Jennifer Rahim (Trinidad & Tobago) Ground Level (Peepal Tree)
In 2011 the Government of Trinidad & Tobago declared a state of emergency to counter the violent crime associated with the drugs trade. The poems in Ground Level confront the roots of the madness and chaos seething under the surface of this “crude season of curfew from ourselves” when the state becomes a jail. Engaging in dialogue with other regional writers who confronted the Janus face of Caribbean creativity and nihilis the poems speak in both a prophetic and a literary, intertextual voice, which combines the personal and the public in mutually enriching ways.

d) Tanya Shirley (Jamaica) The Merchant of Feathers (Peepal Tree)
Tanya Shirley’s poems have their finger on the pulse of contemporary Jamaica in all its exuberance and brokenness. She tells these tales with an elegant mixture of acute observation, outrage, outrageousness, tenderness and understanding. There is joy in the energy and delights of the body but also a keen awareness of ageing and the body’s derelictions. If there is one overarching vision it is that love is “larger than the space we live in”.

Best Book of Drama:
a) Harold A Bascom (Guyana) Desperate for Relevance: A Surreal Drama of Dead Caribbean Writers Bound in a Curious Hereafter
In Desperate for Relevance… Harold A. Bascom sets out to keep alive the little known and even less appreciated literary heritage of the Caribbean. By imaginative development of a conflict and its resolution the play offers a pragmatic solution to a contemporary Caribbean problem.

b) David Edgecombe (Montserrat) Lady of Parham
Lady of Parham is a ghost-story-treasure-hunt legend drawn from Caribbean plantation history. The legend is told mainly through narration and role-play with the play’s immediate conflict as sub-plot.