CSSDF: The journey, the experience, the exposure – a phenomenal rollercoaster!

So let’s begin with the Antigua leg of this journey – the 2014 inaugural National Secondary Schools Drama Festival. Held at the Dean William Lake Cultural Centre, it attracted participation from several schools. [My school] Antigua Girls’ High School was adjudged Most Outstanding Production.

You see, I’ve noticed that as a society, we’ve fallen into a misdirected appreciation for the slapstick/red-panty/pasapasa/shebadda theatre that travels here from Jamaica (no offfence). The reality? While this form of theatre may have its place, it is not even widely appreciated in Jamaica itself. So during preparation for the 2014 festival, my girls would relay taunts and messages from their peer schools – “high school nuh hab no proper theatre person over dey” … “ah yuh go lose” … “wha chupidness y’all doing?”

Was I remotely intimidated? No.

I trusted the system, trusted that the Ministry of Culture and its Drama Director, Owen Jackson, would remain steadfast to theatre. My girls on the other hand, some of whom were also misdirected by red-panty theatre, may have waivered occasionally in their confidence. You see, the piece I’d written and directed for the festival, The Forgotten, was not a comedy. I’ve noticed that in addition to the red-panty theatre, we’ve also shied away from tragedy and serious drama.

The Forgotten, which uses an all-female cast, surrounds the death of a student. This student, who we learn committed suicide, returns to her school memorial and watches as her classmates and friends mourn her, fight over her, and gossip about her. Through a series of flashbacks and revelations by her best friends Letty and Ursula, we eventually find out that Jonee (the ghost student) committed suicide after getting pregnant from a forced incest relationship with her uncle. Adding to the suspense and surrealism of the play are the presence of four hooded and masked creatures we call Enigmas who escort Jonee throughout the play.

As a playwright and director, I continue to be humbled and remain in awe whenever an audience is moved to tears, to laughter, and especially to reflect upon their own lives. In Antigua, I was shocked that persons found the presence of the Enigmas dark and even scary. I was amused when a few young children ran out the auditorium when the “ghost” made her final descent, walking through the audience.

Fast forward to Trinidad – a trip I was not even sure we would make until perhaps a month before the festival – and I was again moved by the reaction of the crowds and the adjudicators.

Let’s begin with the Southern Academy for the Performing Arts (SAPA) auditorium. WOW! Now THAT is what you call an auditorium. From the professional staff (ushers, stage, light and sound crew) to the architecture of the building, our children can say they performed on a real stage in a real auditorium built specifically for theatre and the performing arts. If the government is truly serious about its erection of a performing arts school, I recommend they visit this facility and consult with the directors and architects who built it. There is no way we can fully immerse ourselves in the arts if we cannot provide our performers and stakeholders with a proper facility.

Then there were the personnel. SAPA has its own full time staff who will sit with you to do a paper tech run, then an actual tech run. Although time was against us, it was an awesome experience to work with people who are familiar with theatre. You see, although we may have the equipment in Antigua, there is a vast difference between setting sound and lights for a concert or a clash and setting it for a theatre performance. I do know that there are people on island who would jump at the opportunity to train and work with such tech persons in that profession – another task to be explored.

The festival. I cannot wait to have it here in Antigua and Barbuda, mainly to expose our own students and audiences to various styles of theatre. From the richness of the plays to the professionalism of the youngsters, it was truly an experience. Many lessons were learned – some sweet, some bitter. Realisations were made, some being that island to island we all face the same issues, politics and struggles; we all share the same passion and desire to elevate the arts and keep them alive. It was an honour to be surrounded by so many persons in the arts – playwrights, directors, choreographers, actors. The only real criticism I have of the festival is that we were not able to see all performances – something that will be made mandatory for future festivals. Of those that were seen however, the dedication, technique, and passion were evident. The participating countries had the opportunity to “tour” with two performances in Trinidad (a morning show for school children and then an evening show for the public) and one performance in Tobago.

The students, some of whom were part of established youth companies were disciplined from start to finish. They knew when to have fun and when to be serious. I throw that call out to interested persons (including myself) to take up that mantle. Owen Jackson, with all the strides he has made, cannot do it alone; and for those of us who do take up the mantle, but fail to seek advice and training from the likes of Jackson and others, we do just as great an injustice as those of us who keep asking for programmes for the youth but do nothing to create such opportunities.

That said, I was again humbled by the reception of The Forgotten. The girls performed on point, and delivered a well-staged performance all three times. Students from Trinidad sought them after the school performance for autographs and photos (so yes, they got a true star experience). I appreciated the congratulations and sentiments of appreciation by not only the audience but the adjudicators and more established playwrights from the Caribbean. On the evening of the judging, the adjudicators commended us for approaching such a sensitive and taboo subject, for attempting complexities in theatre and excellently executing them. They even highlighted the performance of our soloist Onalie Lares, who was awarded Best Supporting Actress in the production, an award she rightly deserved. You see, although she had no lines, she kept the play together with her awesome vocals, all performed acapella, she never broke character; despite the fact she had no spoken lines, not once did she break character. Queenela Williams who performed Ursula was awarded Most Promising Actress, while Jianna Minott was awarded Most Outstanding performer.

Although Antigua did not cop the Most Outstanding Production (awarded to Jamaica), we definitely made a huge impact, including a glowing review by the Trinidad Guardian. 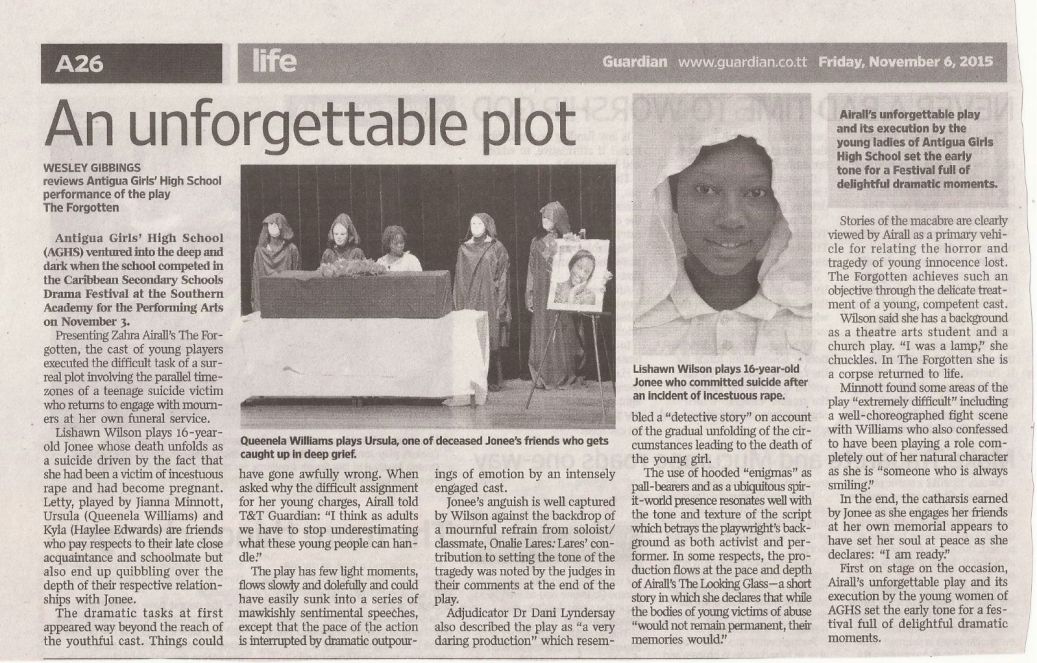 I am ever grateful to Owen Jackson, Monifa Browne, Gilbert Laudat, and the entire Ministry of Culture for their continued support and fight to establish and expand the performing arts in Antigua and Barbuda.

Now… how about you come out and support the children at this year’s festival from December 13 to 18th?

You hear that? I hope you do. I want to thank guest blogger Zahra Airall not just for writing this piece, exclusive to Wadadli Pen, but for all that she does to pump life into the theatrical arts in Antigua and Barbuda, for her activism in the areas of youth and gender, and, though a stretched-thin teacher, for engaging with her charges beyond the classroom, as evidenced by her helming this production. – JCH, Wadadli Pen blogger

One response to “CSSDF: The journey, the experience, the exposure – a phenomenal rollercoaster!”