“Did You Know?  With its anthro- root, philanthropy means literally “love of mankind”. Thus, philanthropy is giving money for a purpose or cause benefiting people who you don’t personally know. Individuals have often set up their own permanent philanthropic organizations in the form of foundations. The greatest American philanthropists have included Warren Buffett, Bill Gates, Andrew Carnegie, and John D. Rockefeller, but tens of millions of us could be considered philanthropists on a much smaller scale.” – Merriam-Webster

This page is our acknowledgment and thanks of our philanthropists right here in Antigua and Barbuda, its diaspora, and beyond, who continue to show their love for youth and arts in Antigua and Barbuda by pledging to support Wadadli Pen’s efforts to nurture and showcase both. At Wadadli Pen, when it comes to our annual Challenge, we’ve always operated by the principle that likkle likkle full basket and with each gift we are able to put together packages to reward, inspire, encourage, educate, and celebrate the young creatives who dare every year.

There’s still time for you, with gifts medium, big, or small to be added to the 2017 list of Wadadli Pen philanthropists. Just email us at wadadlipen@gmail.com

The List of Wadadli Pen Patrons of 2017 so far includes…

Anonymous – We reserve, as always, a spot for those who give without asking for recognition in return, and in particular for one patron who has given consistently since 2012 and who, this year, has pledged to double his gift (a total of EC$1000) so that we can fulfill one of our missions – to take a Wadadli Pen into one of the schools from this Challenge cycle.

Art. Culture. Antigua – the online arts platform founded by former Wadadli Pen judge, and Antiguan-Barbudan artist and arts activist Linisa George has made an EC$300 cash/kind commitment to the Wadadli Youth Pen Prize, and we are happy and thankful to welcome them on board. Check the link for their coverage of the local arts scene.

Barbuda Express – the by-sea ferry service between Antigua and sister island Barbuda has been a reliable patron over the years. To our mind, it’s an opportunity to explore a uniquely paradisiacal island to which we are inextricably connected but rarely get to see. Miles of unblemished pink sand. The Frigate Bird Sanctuary. The Caves. The Seafood. The people. The tranquility. Why would any winner not take advantage of this opportunity? Genuine question.

The Best of Books – This bookstore has been a Wadadli Pen donor since 2004 and has been hosting the Wadadli Pen awards ceremony since 2011. It contributes books, lends support in innumerable other ways, and is also sponsor of the annual Challenge plaque.

Brenda Lee Browne – This writer and founder of the Just Write Writers Retreat is a former Wadadli Pen judge and frequent patron. She’s contributing some invaluable books on writing and scholarships to her writing retreat.

Caribbean Reads Publishing – This independent publishing house out of St. Kitts and the US is dedicated to serving the Caribbean literary community by making publishing more accessible to potential Caribbean authors and increasing the number of high-quality books about and for the Caribbean. It has supported Wadadli Pen in the past – its founder, Carol Mitchell, even served as a judge in the past. Its cash contribution adds to our prize package.

The plaque, which hangs in the Best of Books bookstore, got an upgrade in 2016 and is now known as the Alstyne Allen Memorial Plaque.

THE Caribbean Folklore Project – Monique S. Simon sent us some cards from the project that we hope will prove inspirational to the recipients.

Claudia Elizabeth Ruth Francis – the author of Tides that Bind, Missing, and The Road to Wadi Halfa contributed copies of her books to the cause.

The Cushion Club of Antigua and Barbuda – This is a kids’ reading club with which I volunteered for many years and which over the years has been a part of the Wadadli Pen family through a commitment to provide a gift (usually gift certificates for books) to winners. Sponsored by the Club’s chief volunteer and organizer, this year, once again, the Cushion Club, honours that pledge with a few extras. p.s. if you live on or will be visiting Antigua and Barbuda, your children are welcome and volunteers are always needed; email the Cushion Club at cushionclub@yahoo.com

ECAB – This will be the Eastern Caribbean Amalgamated Bank’s first time as a Wadadli Pen Patron. Welcome! They’ve pledged EC$500 towards sponsorship of the prize for the school with the most submissions which is our way of encouraging the schools to get on board with Wadadli Pen, and rewarding and supporting the work they do 365+1 in a leap year. We thank ECAB for volunteering to support our efforts in that regard.

Frank B. Armstrong through the Seven Seas brand –

Frank B. Armstrong has been with Wadadli Pen since 2011. They have been very generous contributing EC$500 each year plus additional gifts in the way of promotional paraphernalia; and we are happy to have them on board once again.

Harper Collins – the second-largest consumer book publisher in the world will be donating 20+ books from their catalogue to the prize package; with thanks to the Best of Books for making the connection.

The International Women’s Club of Antigua and Barbuda has been a patron from the earliest years of Wadadli Pen and through the years. We are thankful to have them on board with us once again with their usual EC$500 contribution. The Club was founded in 1986 as the American Women’s Club of Antigua and Barbuda and a notable project is the IWC Scholarship Fund which assists women in pursuing tertiary educational goals. Also, they donate hampers during the Christmas season. We appreciate them sharing some of their resources with us.

Jane Seagull – Every writer needs a journal, right? Artist Jane Seagull has contributed a personalized journal to Wadadli Pen since 2013.

Jennifer Meranto is an Antigua-based artist whose art intersects with her environmental action and activism. She saw our share on social media and stepped forward to offer three of her paintings, because she’s cool like that.

Joanne C. Hillhouse – Coordinator of Wadadli Pen since 2003 when she first hatched the idea and 2004 when it launched, Hillhouse has contributed copies of her books (The Boy from Willow Bend to Musical Youth) through the years; this year, in keeping with Wadadli Pen’s development goals, she’ll contribute a one-on-one coaching session (part of her suite of freelance services).

Paperclips – Paperclips is a provider of office, school, art supplies, and more. Last year, they discounted Wadadli Pen on the pen that we typically gift to the winner as a practical tool and symbolic keepsake. This year they are sponsoring this gift.

They have been gifting a basket or bag of goodies to a Wadadli Pen winner for the past several years. We are happy to have them on board yet again. 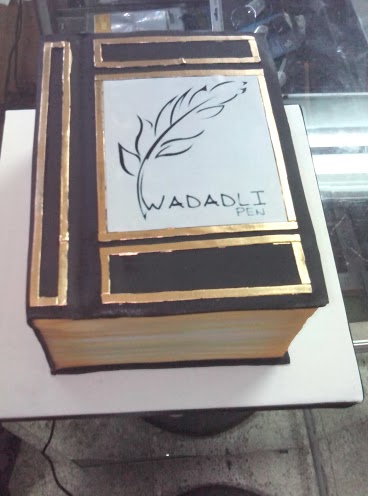 Cake designed and made by Danielle George-John of Sweet Dreams.

Owned by cake artist Danielle George-John, this company first contributed to Wadadli Pen in 2014 and will do so for a second time in 2017. Their cakes are works of art which any recipient will want to look at as much as eat.

This New York-based businesswoman has been giving back to her home country (Antigua and Barbuda) via Wadadli Pen since 2014. She contributes a cash prize of EC$500 plus gifts for the little ones.

West Indies Cricket Board – A gift for one of our prize recipients who happens to be a cricket lover.

Ongoing thanks to Antiguanice.com for helping Wadadli Pen maintain an online presence year round by sponsoring the Wadadli Pen page on its website & to the various media who have helped us get the word out all season.

Filed under A & B Lit News Plus, A & B WRITINGS, Caribbean Plus Lit News, Links We Love, Literary Gallery, Wadadli Pen 2017, Wadadli Pen News