I’m sharing, below, the link to the announcement re a Cultural Policy for Antigua and Barbuda because this is something that has been on my radar as a reporter covering the culture and arts scene, and as a writer and arts activist. But first some context and questions.

From my own reporting…

In 2011, Marion Byron, the education officer responsible for Music in the Ministry of Education, discussing the National Youth Symphony Orchestra not having a home, spoke of the lack of “a serious cultural policy” as a factor: “Because there’s no cultural policy all the arts are just trying to make do and there (are) no standards…we just try to do to the best of our ability.”

In 2010, Dorbrene  O’Marde, writer and commentator, speaking at the opening of the Leonard Tim Hector Memorial Week, touched on the need for a cultural policy; but not as a dead document, rather (as I described it then) “as the vascular map” with culture being the blood running through the body and the creative energy of the people as the pumping heart. Forgive my hackneyed analogy but the cultural policy, O’Marde suggested, should not be about (again my words) “‘developing’ that which is neither static nor ‘preservable’ (i.e. culture) but on honing the creativity of the people and acknowledging the intrinsic relationship between culture and all aspects of life … (including) tourism, investment, the environment, education, farming, sports; not just performance and production management, which he suggested was the current narrow read on culture and on government’s role in its development.” 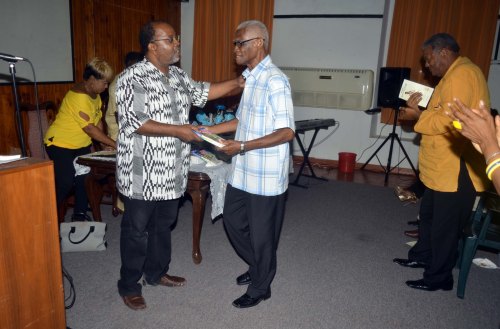 Dorbrene O’Marde, foreground, left, with late calypso writer Marcus Christopher who for a long time tried to get his calypsos published in book format. This is at the launch of Dorbrene’s book on calypso icon The Monarch King Short Shirt.

These are just two examples of this idea of a cultural policy coming up over the years. When I saw recently the ad for someone to guide the process of drafting a cultural policy, I was surprised. This amorphous cultural policy had been discussed for so many years with no evidence of the process being moved forward, I imagined it was kind of like Big Foot or Lochness – a mythical thing you hear about but will never see, and who even knows if it’s real. but shortly after that there was an announcement that someone (a Jamaican firm actually) had been selected to guide the process forward.

It subsequently occurred to me, in conversation with others in the arts community since this announcement, that there are a whole heap of unknowns here. Apart from the obvious, how was the person selected and did any Antiguans and Barbudans bid for consideration, of course (see the official response to this concern here). Unknowns like…

Will this be a living document, activated and transformative, or filed away as so many other conversations, research, and reports on various areas of national development have been over the years. Some are not confident because we’ve been here and had people pick our brains before, and nothing has changed. There is consultation exhaustion (and think about what you’re asking when you ask artists to meet and meet again and meet again especially if there’s no meat). But I can get behind this if the powers that be are prepared to back up the research and drafting process with transformative action.

What does a cultural policy mean, tangibly? Well, …er… it… okay, so what a cultural policy does is… *crickets* … point is do we have a clear idea of what this process is designed to accomplish…as one person asked me, what will this policy really do? I tried to speak to it as best I could but I think the answer unfortunately, for some of us is… well, er, arm. And there’s always Wikepedia. So I can only hope that the consultant selected has the expertise and is given the time and resources to do the necessary research to define and articulate what this process is meant to accomplish and to put concrete benchmarks in place.

Will Antiguan and Barbudan consultants be a part of the process? Some have taken issue with the selected consultant being from Jamaica, and I understand because we are talking about a document that is in some ways very particularly about the character of the country; and digging in to that requires an insider’s perspective and network. But I think it can work if a team approach is taken, and if said team includes people who bring certain experience of researching and drafting these kinds of policies working with (not just picking the brain of) Antiguan and Barbudan consultants.

At least one person I’ve spoken to thinks I’m being naïve to even suggest that this could be anything more than business as usual – here, let me pick your brain; let me write up this document you’ll have no real role in shaping and never see; now let me file it away in a rusty (and sadly not metaphorical) cabinet. There, job done.

So, those are some of the issues as I see them but as a lover of my country, and as writer and arts activist working in a country that sometimes doesn’t seem to love me back (the struggle is real for our arts community where just this week I was involved in a facebook thread started by a visual artist and drew in last I checked input from people in the dance, literary, visual arts and production, all lamenting the lack of transparency and inclusiveness re CARIFESTA and funding re arts in general), I want to be hopeful that this process and the document it produces will lay some kind of road map for how artists function in this country and how we are valued and supported, but also for how we exist collectively as a people, who we are, what we value, how we define ourselves but also how we imagine ourselves. Aiming too high?

Anyway, whatever comes of it, here’s the article announcing the process (follow the link to read the whole thing):

“Lisa Callender of Protrade Consultancy, a firm in Jamaica, has been appointed to head the newly created National Cultural Policy project.

Minister with Responsibility for Culture, Honourable Chet Greene, made the declaration at a press conference at the Sir Vivian Richards Stadium yesterday.

According to Minister Greene, the project is being funded by a grant from the Caribbean Development Bank (CDB), and will seek to bring Antiguans and Barbudans closer toward the realisation of a cultural renaissance.” Read more.

As with all content (words, images, other) on wadadlipen.wordpress.com, except otherwise noted, this is written by Joanne C. Hillhouse (author of The Boy from Willow Bend, Dancing Nude in the Moonlight,  Fish Outta Water, Oh Gad!, Musical Youth, and With Grace). All Rights Reserved. If you enjoyed it, check out my page on Amazon, WordPress, and/or Facebook, and help spread the word about WadadliPen and my books. You can also subscribe to and/or follow the site to keep up with future updates. Thanks. And remember while linking and sharing the links, referencing and excerpting, with credit, are okay, lifting whole content (articles,  images, other) from the site without asking is not cool. Respect copyright.

Tagged as Antigua and Barbuda, but will there be action, consultations, cultural policy