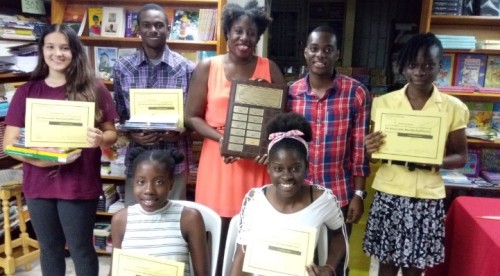 ‘Creak’ which tells of a young local woman in a sexual ‘relationship’ with an officer from the US army base in Antigua in the early part of the 20th century was found to encompass the theme “perfectly” in addition to being “well written”.

Kyle, in his winners’ response during the awards, said he first entered the Challenge in 2004; this is his first trip to the finals though he noted that after the 2006 awards Wadadli Pen founder/coordinator Joanne C. Hillhouse told him “I really enjoyed your story…keep on writing” and so he has.

The Wadadli Youth Pen Prize, started in 2004 to nurture and showcase the literary arts in Antigua and Barbuda, has always been about giving young people the opportunity to explore stories and ideas of interest to them, while telling tales from a specifically Caribbean space, and challenging them to grapple with the craft of writing as much as appreciating the art of it. Twenty eighteen, a year in which almost 70 entries were received, was a rare year for Wadadli Pen in that a specific sub-genre (historical fiction/poetry) was put in place and rather than winners/prizes broken down by age or other categories, it was ‘Winner Take All’.

That said, there were some honourable mentions – one very creative and singled out as the best example of creative fiction but edged out by the winner due to the quality of the writing, others thought to be thought-provoking, creative, or compelling but falling short due to clichés or other flaws. The honourable mentions received certificates and books from the Best of Books, and a two-hour training session (Presenting: Telling Your Story Orally) sponsored by Barbara Arrindell & Associates. The named honourable mentions were Andre Warner, 20, Rosie Pickering, 14, Andrecia Lewis, 18, Chloe Martin, 14, and Ava Ralph, 17 – a mix of past finalists (Ralph and Lewis) and totally new voices.

Wadadli Pen remains committed to unearthing those new voices and, as such, also gave a prize to St. Andrew’s Primary School for its efforts to encourage student participation and, as a result, having the most grouped submissions from any educational institution. Educator Marissa Walter accepted the prizes on behalf of the school. The prizes are books and other gifts contributed by authors Barbara Arrindell, Floree Whyte and Moondancer Books, and Joanne C. Hillhouse, and by the Best of Books bookstore.

The Best of Books also sponsored all certificates plus the emblazoning of the winner’s name on the Alstyne Allen Memorial Challenge Plaque.

The Wadadli Pen team expressed thanks to all participants and patrons both of whom have made this Challenge possible for 14 years. For more on Wadadli Pen and to find out how you can support its efforts, visit https://wadadlipen.wordpress.com or contact wadadlipen@gmail.com

See also Who Won What in 2018? and Creak by Kyle Christian

This release has also been disseminated to Antiguan and Barbudan media.

Also, no timeline (or promises) but stories by the honourable mentions in the 2018 Challenge may be added; so check back.