From the Mailbox – Hurston Wright Legends 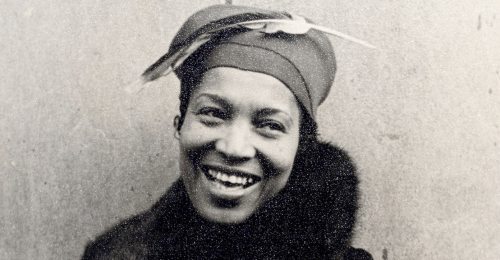 You know I love Zora Neale Hurston (pictured) and respect Richard Wright as an important part of our African diasporic canon, and you’ve seen me post here before about the programme named for these African American literary heavyweights (e.g their Hurston Wright Writers Week). This latest post is the announcement of the winners of this year’s Hurston Wright book awards – a programme that recognizes and lifts up writers from the aforementioned diaspora, in fact, Kwame Dawes a child of both Africa and the Caribbean, resident in America, was a nominee in the poetry category this year, and Antigua and Barbuda’s own Marie Elena John (Unburnable) is a past nominee. I’m late but still pleased to announce this year’s winners some of whom are already on my TBR and will no doubt find their way on to yours. Also, here’s a link re submission guidelines for the next round of nominees. Finally, walk good and rest in power to Hurston Wright Legacy Award winner Ntozake Shange, whom you will know as the author of the seminal and influential choreopoem For Coloured Girls Who Have Considered Suicide/When the Rainbow is Enuf. – JCH blogger and Wadadli Pen founder and coordinator

The winners and finalists of the Legacy Awards are as follows:

Debut Novel
Winner: The Talented Ribkins, Ladee Hubbard (Melville House Publishing)
In the words of the judges: “Characters map family secrets and lore as they reckon with magical powers that bring both vulnerability and strength. For better or for worse, they learn who they are in solitude and as a collective.”

Fiction
Winner: Black Moses, Alain Mabanckou (The New Press)
In the words of the judges: “Set in the Republic of Congo, this funny, efficiently-rendered picaresque tale superbly traces the hero’s psychic collapse. The perils of tyrannical government are deftly interrogated throughout this seemingly simple and humorous narrative about an orphan boy.”

Finalists:
The Woman Next Door, Yewande Omotoso (Picador)
In the words of the judges: “Two squabbling octogenarian women on different sides of South Africa’s racial divide live out their rancorous days meditating on the pain of the past and the present. In telling the story of the feud between them, The Woman Next Door brings characters who are often overlooked to the center stage.”

Sing, Unburied, Sing by Jesmyn Ward (Scribner)
In the words of the judges: “This Faulknerian tale (heavily influenced by As I Lay Dying) about broken lives and about how the past keeps haunting the present is written with lyricism and power.”

Nonfiction
Winner: The Dawn of Detroit: A Chronicle of Slavery and Freedom in the City of the Straits, Tiya Miles (The New Press)
In the words of the judges: “Miles mines scattered and long-forgotten accounts to reconstruct a stunning, surprising and often-horrifying account of Native Americans and African Americans in 18th century Detroit.”

Finalists:
Cutting School: Privatization, Segregation, and the End of Public Education, Noliwe Rooks (The New Press)
In the words of the judges: “Pulling back the veil of neoliberal ‘solutions’ to end the racial divide in our education system, Cutting School demonstrates that the demolition of public education reinforces rather than alleviates the so called ‘achievement gap’ between black school children and their white peers.”

The Cooking Gene: A Journey through African American Culinary History in the Old South, Michael W. Twitty (Amistad)
In the words of the judges: “Following the food trail through his multiracial family history, DNA research, race, and traditional recipes, he creates a comprehensive re-evaluation of the meaning of food to African Americans and their ancestors.”

Poetry
Winner: Semiautomatic, Evie Shockley (Wesleyan University Press)
In the words of the judges: “Despite the ugliness of the violence around us, she has written a collection of poems that both chronicles it and decries it, all while offering us the beauty of her lines.”

Finalists:
Ordinary Beast, Nicole Sealey (Ecco)
In the words of the judges: “Sealey addresses our frailty, our fears, our folly, with grace, humor, the perfect timbre of understanding, steady in its conviction that love requires praxis.”

Incendiary Art, Patricia Smith (TriQuarterly Books/Northwestern University Press)
In the words of the judges: “At once dexterous and transcendent, Incendiary Art digs far below surface issues to their roots, offering readers a rare glimpse into the nuances of characters’ lives with unmatched frankness and grace.”