Claude McKay is a Jamaican born author associated with the Harlem Renaissance in the US. His books include 1928’s bestselling and award winning Home to Harlem (this was the first book of his that I read while at the University of the West Indies and it remains a favourite), 1933’s Banana Bottom (a classic of Caribbean literature), and other works of fiction, non-fiction, and poetry. McKay’s most well-known poem is perhaps ‘If we must die’. The 1937 Paul Robeson film Big Fella is based on his novel Banjo. A 1941 manuscript of his – Amiable with Big Teeth: a Novel of the Love Affair between the Communists and the Poor Black Sheep of Harlem – was published in 2017.

McKay, though deceased since 1948, has not been forgotten in his home village in Jamaica as Dr. Honor Ford-Smith, a Jamaican Canada-based playwright, actress, scholar, and founder of the renowned theatre collective Sistren discovered. Her adventure (with images) is recounted below with her permission. 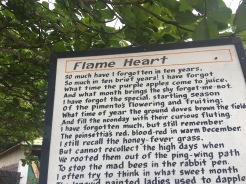 Yesterday I went with some friends to offer respect to one of my favourite writers and one of the world’s most extraordinary beings – Claude McKay. I had never ever been but Winston James (who wrote “Fierce Hatred of Injustice”) suggested it last year and since then it’s been one of the items on my bucket list . This is a trip everyone should make…Thanks Winston…..

We drove to James Hill in Clarendon which likely still retains much of the beauty it had in McKay’s time. It hard not to romanticize the place and to be in awe of what he achieved. James Hill is still much as he describes it in My Green Hills and Banana Bottom. It is “country” in the best and most beautiful sense of that world. Green mountains lined with bamboo and tree ferns. Folks growing food – yam, banana, tomato, pak chow and carrot; folks hanging out playing dominoes on the corner, women dressed up for church in sparkling white to dazzle your eyes. Ni(ce) night music blaring from the shop….”A come wi jus a come. a come wi jus a come and wi no waan no bodderation here.” Folks stopping to chat – asking us who were were and why we had come and how we knew about McKay.

We went up to the Claude McKay High School to see the poetry garden in his memory. The security guard Mr Joseph Anthony Thompson, was wonderful and took time to show us around and he was very gracious. There are hand painted poems mounted on boards and a little platform with a plaque in his name….(All fenced off – in true Jamaican style as we have become a place of gates and fences). We read the poems aloud….”If we must die” and “I shall return” and more. And we saw his grave which needs a big cleaning and a new stone. The writing on the present one is illegible and a tree has fallen on it in protest against the state it is in.

But, he is far from forgotten by his community. His memory lives and even if most folks haven’t read the books, people are so proud of him.

We went down to Sookie River which is where he actually lived. His descendants Sparrow McKay and Jenny McKay talked to us about their grand uncle and Jenny, without being asked, dropped what she was doing and insisted that we see his birthplace. So we climbed up the hill, puffing and blowing all the way to the site where he grew up and where his parents are buried. Shelley slipped and fell on the mud coming back down but we made it. Family members still live there but the original house has been replaced.

What a man James Hill gave to the world at a time when what he did was for many, unthinkable…….His way with sonnets, his insight into the rural consciousness of the Black farmers that made him, his commitment to the writing life, his audacity, imagination and courage, his “fierce hatred of injustice ” in the midst of colonialism (title of Winston’s Book) and when you go to Clarendon you feel this grounded bassline of wisdom as a legacy he has left us all.

There are so many places like this dotted around the region.  So inspiring they take your breath away and so lovely they drown out all the bickering and the bad mind and the fashionable cynicism and there is much to be cynical about but when you go there you feel as if you are rooted in the energy of the forces that speak through the voices that call out  the remaking of the world.

I was moved by this when it landed in my mailbox and thank Dr. Honor Ford-Smith for granting me permission to share.

As with all content on wadadlipen.wordpress.com, except otherwise noted, this is written by Joanne C. Hillhouse (author of The Boy from Willow Bend, Dancing Nude in the Moonlight, Oh Gad!, Musical Youth, With Grace, and Lost! A Caribbean Sea Adventure). All Rights Reserved. If you enjoyed it, check out my page on Amazon, WordPress, and/or Facebook, and help spread the word about Wadadli Pen and my books. You can also subscribe to the site to keep up with future updates. Thanks.