Antigua and Barbuda’s Grand Dame of Poetry, Mary Quinn, got front page coverage of her final chapter in the Daily Observer. An article headlined The Nation Mourns An ‘Iconic Figure’ recalled that “She produced a weekly column in The Daily OBSERVER entitled Tales Out of School, through which she reflected on her experiences as a teacher, mother, and patriot observing the goings on in the nation.” Something we forgot to mention in our tributary obit. of Mrs. Quinn (nee Hampson) here on the blog. Go here to read the full Observer article in which youngest daughter Lydia Quinn announces plans for a posthumous publication. Martina Johnson of Observer also wrote a lovely tribute for which I am unable to find a link to share (in which she speaks of Mrs. Quinn’s diligence in keeping the records of the Observer library and serving as not only a historian but a resource for the journalists breaking the news, and the precision she applied to the writing [long hand on yellow notepads with a number 2 pencil] of her column ‘Tales out of School’). It’s worth noting that while I have often checked the media for its coverage of lack thereof of not just the arts but our artistic icons at their passing – they’ve done a great job with the likes of Rick James (also tributed in my CREATIVE SPACE series), and especially Dr. Ramsey (also celebrated here on the blog), and now Mrs. Quinn who also received deserved editorial treatment.

Another passing recently covered in the press is that of Antiguan-Barbudan calypsonian Bambi: ‘To say that he will be sorely missed is putting it mildly. He loved our culture and traditions dearly, and did his best to keep the same alive. Whenever he donned his John Bull costume, he became one with our ancestors – the original John Bulls, many of whom hailed from the Yoruba and Asante of West Africa, and he played the role to the hilt. Then there was his calypso singing – pure entertainment – hilarious, side-splitting songs that spoke to the light-hearted nature of the man. It was almost as if he was saying to us, that our lives can go by in a blur, if not for moments of laughter, conviviality and good cheer. Life would be mirthless and insufferable, were it not for Mighty Bambi moments. For example, his risible solution to our unemployment problem was for those seeking work to “Bag smoke, count dew, dry ice, go-ah dead house fuh count crab louse, and bang dawg wid tick!”’

Out of Barbados, there is this 2018 ArtsEtc list of Indy recs from Bim which includes Elegguas by literary elder Kamau Brathwaite and Anthony Kellman’s Casa de las Americas winning Tracing JaJa; and the announced release of an e-comic book series by the National Cultural Foundation of Barbados. This e-book release is in concert with a radio drama in recognition of a public awareness campaign around the Day of National Significance (re the country’s 1937 riots). ‘NCF Cultural Officer Literary Arts and Producer of this segment of the campaign, Mrs. Ayesha Gibson-Gill, expressed her excitement and satisfaction with the comic series remarking that, “It will demonstrate that we have interesting stories and amazing artists.”’ I know they have their complaints but the energy coming out of the National Cultural Foundation re lit arts – the programmes  I’m looped in to because I’m somehow on their mailing list make me envious (because, Oh Antigua).

In Antigua, one of the discussions leading up to Carnival season has been copyright. It’s a still-moving story but this May 27th 2019 extract from the Daily Observer can maybe help you get caught up. 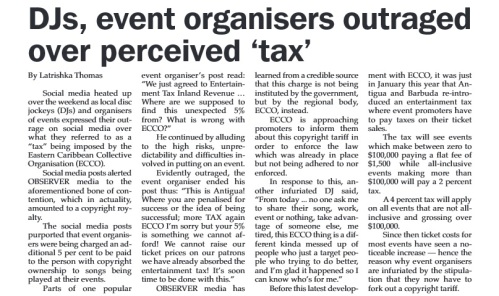 I don’t quite have a handle on the ins and outs of this particular issue (even after reading about it on the media and social media) but, broadly speaking, I can see how for DJs and event planners operating in Antigua and Barbuda being hit with entertainment tax, copyright payment being taken upfront (as a percentage of the gate or estimated gate receipts), and the new notice from Labour Dept re work permits for guest performers all in the same year may have them feeling pressed (and will have patrons feeling it in the pocket – the inflation creep is real in these streets). As a writer, both as a novelist (and creative writer) and as a freelancer (journalist and content creator), I do know the importance of copyright and royalties though (art creators gotta eat) and do feel there is need for continuing education re use of artists’ intellectual property; and do think the conversation is necessary. Which is why I’m sharing it here.

As with all content on Wadadli Pen, except otherwise noted, this is written by Antiguan and Barbudan writer Joanne C. Hillhouse (author of The Boy from Willow Bend, Dancing Nude in the Moonlight, Oh Gad!, Musical Youth, Dancing Nude in the Moonlight 10th Anniversary Edition and Other Writings, With Grace, and Lost! A Caribbean Sea Adventure; also a freelance writer, editor, writing coach and workshop facilitator).