Blurb is an Action Word

A blurb is not a review. It’s more of an endorsement from another writer – typically one who is more established, and ideally one who has read the book in advance and been gracious enough to attach their brand to yours – it’s  an act of faith and one not without risks. It is also a choice and an approached author’s decision to say no (even if by ignoring the request to blurb) should be respected. Their time and their name are of high personal value to them.

The good news is that a blurb can also be excerpted from a publicly posted review – so pull those excerpts.

(did you catch all the reviews of Morrison’s work and of the film about her work?…not that her work needs it)

It is a marketing tool. It can be found on book jackets,

(Sourced and/or selected by the publishers, the Oh Gad! blurb, credited to Eric Jerome Dickey, reads “A brilliant writer”; and the With Grace blurbs –  by author and publisher Mario Picayo, The Caribbean Writer journal editor Alscess Lewis-Brown, and the judges of the Desi Writers Lounge story contest who had described With Grace as “a powerful narrative that is magical in spirit and human in character” –  credited as endorsements can be found on my blog)

websites or blogs, social media, banner (which I did one once and which, after the launch, became an in-store display with quoted endorsements and reviews) – anywhere it might catch the potential readers’ eye.

I have been blurbed and I have been asked to blurb. It’s daunting either way (thankful when I get it, accepting if I don’t; and never take it lightly when asked to do it – even if I have to say no).

To the point of this post. Do you know where the term blurb comes from? Via (Merriam-Webster), it was coined at the 1907 American Booksellers Association banquet, when Gelett Burgess handed out copies of his book ‘Are You A Bromide?’ and on the jacket was an image of Belinda Blurb. Yep, the term – representing promotional text on a book jacket – was named after the first person to literally blurb. 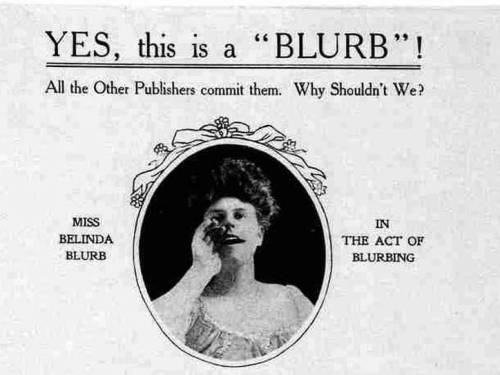 And now you know, and in publishing as in life, to paraphrase G. I. Joe, knowing is half the battle.

2 responses to “Blurb is an Action Word”