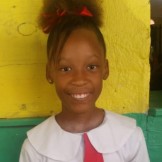 Membership has its privileges. We have to give pride of place to the Wadadli Pen Challenge Awards, the announcement of which went live (literally) on Saturday 9th May 2020  – the stories and breakdown of winners have been posted. Congrats to the main prize winners Andre J. P. Warner (A Bright Future for Tomorrow) and Cheyanne Darroux (Tom, the Ninja Crab). The full list of patrons can be found here. 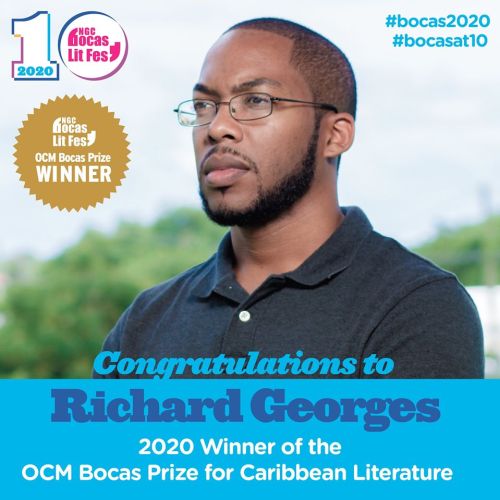 Richard Georges of the British Virgin Islands is the 2020 winner of the OCM (One Caribbean Media) Bocas Prize for Caribbean Literature for his poetry collection Epiphaneia. This is his third collection after Make us all Islands, which was shortlisted for the UK’s Forward Prize for Best First Collection, and Giant, which was long listed for the OCM Bocas Prize and highly commended by the Forward Prizes. He is a founding editor of the online regional literary journal Moko. The BVI writer is born in Trinidad and, fun fact, has Antiguan roots (so much so I’ve actually debated putting him in the local book bibliography as I have, for instance, Guyanese writer with Antiguan roots, Ian McDonald, but I didn’t want to appropriate). His grandfather is from the BVI but went to school here and married a local girl before migrating (Scotland, BVI, Guyana, Trinidad). The OCM Bocas Prize, which has a US$10,000 main prize, is one of if not the major prize for literature from the English speaking Caribbean. Previous winners are St. Lucia-born Nobel Laureate Derek Walcott (2011, White Egrets), venerated Trinidad born literary elder Earl Lovelace (2012, Just a Movie), another multi-award winner, another Trini, first female Monique Roffey (2013, Archipelago), Trini Robert Antoni (2014, As Flies to Whatless Boys), St. Lucian Vladimir Lucein for his first publication (2015, Sounding Ground), Jamaican Commonwealth award winning literary icon Olive Senior (2016, The Pain Tree), Jamaican Kei Miller, also critically acclaimed and award winning (2017, Augustown), Trinidadian writers Jennifer Rahim (2018, Curfew Chronicles) and Kevin Adonis Browne (2019, High Mas).

The win was formally announced by chief judge Earl Lovelace during a live broadcast on May 2nd, which also included a presentation by Amanda Choo Quan, 2020 winner of the Johnson and Amoy Achong Caribbean Writers Prize (a developmental prize for emerging writers – this year going to a writer of non-fiction).

See this schedule to catch other streamed Bocas events.

The Commonwealth Short Story Prize field has been narrowed from 5000+ to these few:

Sharma Taylor of Jamaica and resident in Barbados is one of three Caribbean writers (along with Jamaica’s Brian Heap, Brandon McIvor of Trinidad and Tobago) short listed for the 2020 Commonwealth Short Story prize. I caught up with her for an interview about her writing journey (with tips for other writers) which can be read in full on my blog. Here she discusses her short listed story: “On the Commonwealth Writers’ website when they announced last year’s shortlist, I saw a photo of one of the 2019 Commonwealth Short Story Prize shortlisted writers and was fascinated with his prominent nose. I then wondered what my face would look like if I had his nose and how I would deal with it in the most awkward time of life when appearances matter: the teenage years.”

Roger Robinson’s vision of Trinidad as a “portable paradise” of “white sands, green hills and fresh fish”, has won the British-Trinidadian poet the Royal Society of Literature’s £10,000 Ondaatje prize, which goes to a work that best evokes “the spirit of a place”. – read more (via Repeating Islands via The Guardian)

Announcement via my Poetry publications page of inclusion of three of my poems (Grandmother and Child, Weather Patterns, and Waste Not) in UK magazine Skin Deep’s Is This The End? issue

Sharing the video essay below spotlighting four Antiguan and Barbudan authors on my Media page.

Sharing the video and a Discover Montserrat book recommendations list that includes my children’s picture book Lost! to my Lost! Endorsements and Recommendations page.

The Caribbean theatre community is still mourning the passing of Trinidad and Tobago iconic playwright, producer, and more Tony Hall who died in April at 72, only 3 days after retiring according to this TnT media report and reflection:

Also while they have no Caribbbean ties that I know of, I have to mention the passing of two Black musical giants – a founding father of Rock n Roll Little Richard who was in his 80s when he died on May 9 and one of the men who shaped modern RnB, hip hop, and culture generally as founder of Uptown Records and head of labels like Motown Andre Harrell who was just 59 when he died on May 8.

As with all content on Wadadli Pen, except otherwise noted, this is written by Joanne C. Hillhouse (author of The Boy from Willow Bend, Dancing Nude in the Moonlight, Musical Youth, With Grace, Lost! A Caribbean Sea Adventure/Perdida! Una Aventura en el Mar Caribe, and Oh Gad!). All Rights Reserved. If you enjoyed it, check out my page on WordPress, and/or Facebook, and help spread the word about Wadadli Pen and my books. You can also subscribe to the site to keep up with future updates. Thanks.

Filed under A & B Lit News Plus, A & B WRITINGS, Caribbean Plus Lit News, Links We Love, Literary Gallery, The Business, Wadadli Pen 2020, Wadadli Pen News