A reminder that the process with these Carib Lit Plus Caribbean arts bulletins is to do a front and back half of the month, updating as time allows as new information comes in; so, come back, or, if looking for an earlier installment, use the search window. (in brackets, as much as I can remember, I’ll add a note re how I sourced the information)

I’m glad to finally have at least partial credits as Pelle was one of the artists whose credits I had requested of the artist some time ago, for the songwriters data base and song lyrics data base. I know there’s more as he was a prolific and respected contributor to the art form. But it’s a start and I’ll be adding this info to the database as soon as able. I’m sorry that this is the season for it; sorry that we have lost another cultural mover and shaker, and icon in his own right. And 2020 has already taken so many of those.

Lyricks Man concluded, in his post, “Thank you LittleMan. You were ONE of the persons who help moulded me into the exceptional Artist that I am today. You have encouraged me and has always looked out for me. I Will Miss You! Thank You RUPERT LITTLEMAN PELLE!!!
REST IN PERPETUAL PEACE” (Source- facebook)

Myriad Editions shared an interview with the Lorna Goodison (the most recent poet laureate of Jamaica) that we decided to gift readers of the blog for Christmas. Enjoy. (Source – email from Myriad)

Remember to check the Reading Room and Gallery as that’s where new (or new to me) content will be posted for the most part. But I did want to share that the last (of 2020) CREATIVE SPACE (my column on Antiguan and Barbudan/Caribbean art and culture) has been published (in the Daily Observer newspaper and online) and for the first time a video version has been posted. I’m really happy with this series overall and can hardly believe that it’s 22 installments in with Daily Observer and continues to grow – two developments being it’s been monetized (Observer pays for the first print rights in Antigua and Barbuda and the editor assures me that they’ve had great feedback and I know the images have made the front page twice) and it’s now with this installment leapt from print and online written to online video – the latter two versions I’m still working to monetize. But in the meantime, I’ve been enjoying creating it and I have a long lead list of subjects still untapped. As for the first video, I worked hard on it and I’m hoping you’ll check it out, like, comment, subscribe, share. Here it is.

He won the main Wadadli Pen arts prize in 2010 and was honourable mention in the 10 year anniversary arts challenge in 2014. His new work can be seen in this video of the finals exhibition posted by his art professor. We, at Wadadli Pen, look forward to his continued arts evolution. (Source – Shem’s facebook page)

Eleven-year old Josse Franco and eight-year old Josh Hansraj topped their age categories in Dragonzilla’s Short Story Writing Challenge in Trinidad and Tobago. Their prizes: laptops – courtesy the NGC Children’s Bocas Lit Fest. In addition, People’s Choice Awards, determined by the number of social media likes and shares towards each video, were presented to Nivaan Ramjattan in the 5-8 age category, and to Tahlia Ramsamooj in the 9-12 group. For details, go here. (Source – Bocas email)

The Queen Mary Wasafiri New Writing Prize has gone to Sharma Taylor, of Jamaica but long resident in Barbados. Sharma won for ‘How You Make Jamaican Coconut Oil’ in the fiction category alongside Sharanya Deepak of India for life writing and Yasmine Seale of Turkey for poetry.

This image of Sharma is from a hike during a Commonwealth Writers workshop we both participated in in Barbados in 2018.

“Framed as a recipe, this story’s beguilingly playful opening sets the scene for a compassionate, nuanced portrait of family life. ‘With enormous vigour and zest and skill it introduces you to a voice, to a setting, to a family, and it does it absolutely beautifully’ said fiction judge and Penguin editor Simon Prosser. ‘This story just totally leapt at me and gripped me from the first moment.’”

The prize gives 1000 pounds to the winners and publishes the winning works in the 35-year old Wasafiri magazine, the premiere publication for writers of colour in the United Kingdom. It is open to writers all over who have not published a book in their chosen genre. Here’s the announcement.

If you’re a blog regular, you may recognize Sharma’s name as she’s been on quite the winning streak. She was a finalist for the Elizabeth Nunez Award in the Brooklyn Caribbean Literary Festival’s Caribbean Fiction Writers Competition 2020, shortlisted for the 2018 and 2020 Commonwealth Short Story Prize, in addition to being longlisted for the prize in 2019, and won the 2019 Johnson and Amoy Achong Caribbean Writers Prize and 2020 Frank Collymore Literary Endowment Award for an unpublished collection of short fiction. Re-acquaint yourself with her by reading, if you haven’t already, the interview with her posted on my Jhohadli blog early in 2020. (Source – originally John Robert Lee email blast followed by independent research)

Antiguan and Barbudan Burt Award winning book Musical Youth received international recognition in December when it (actually the second edition released in 2019) was named to Kirkus Reviews’ list of best indie books. ETA: it’s also been named to Kirkus’ list of best indie romances. Musical Youth is published by indie press Caribbean Reads Publishing out of St. Kitts-Nevis. Musical Youth had received a coveted starred review from Kirkus earlier this year with a review posted online in September and in their print publcation in November. (Source – me via my publisher)

As noted in the previous December 2020 Carib Lit Plus, voting is open to the end of December, following the completion of the reader nominated cycle, for the Caribbean Readers’ Awards in which the People! get to choose the best Caribbean books of the year. There are Antiguan and Barbudan nominees in several categories (including Wadadli Pen alum Rilzy Adams among several canon heavyweights for novel of the year) – so look out for those.

But vote sincerely for the books, stories, and writers who inspired and entertained you. Here’s where you go. (Source – social media, various)

Joan H Underwood, Antigua and Barbuda’s former Ambassador to Venezuela and an internationally certified master trainer and professional coach, has put her pandemic downtime to good use, rolling out her first book, described as a must-have guide for managers and would-be managers. Managers’ First Aid Kit: A Practical Guide to Remedy the Three Most Common Managerial Challenges will likely also resonate with entrepreneurs and others – as between media and in-store appearances there has already been considerable interest in the December title. “Regarding her motivation to write the book, Ambassador Underwood says that, during her career as an HR Professional and Executive Coach, she encountered numerous high performers who struggled with the transition from individual contributor to manager. The difficulties encountered are not unique to Caribbean managers. In fact, published data reveal that as many as 60% of new managers either fail outright or underperform during their first two years. Managers’ First Aid Kit is a practical guide to remedy the three most common challenges faced by new managers – namely, managing self, managing others, and managing systems and processes.” Underwood has herself transitioned from laboratory technician to a hospital administrator to general manager to talent and leadership development specialist. “She is a former chairman of the Antigua and Barbuda Employers’ Federation (ABEF) and has been a lecturer/facilitator with the Cave Hill School of Business/UWI for two decades. Further, her contributions to the business sector in Antigua and Barbuda and to the wider Caribbean resulted in her being recognized with the 2001 Caribbean Employers Federation Employers Champion Award and the ABEF’s 2011 Award for Sterling Contribution toward the Growth and Development of the Business Community in Antigua and Barbuda.” (Source – author press release)

One tangible thing former Jamaican poet laureate Lorna Goodison left as she exited the role in 2020 was a collection entitled New Voices: Selected by Lorna Goodison, Poet Laureate of Jamaica, 2017-2020.

Stick No Bills, which is one of two books on the Caribbean Readers’ Award 2020 Short Story (Collection) Shortlist, by Elizabeth Walcott Hackshaw was released by Peepal Tree Press in October. 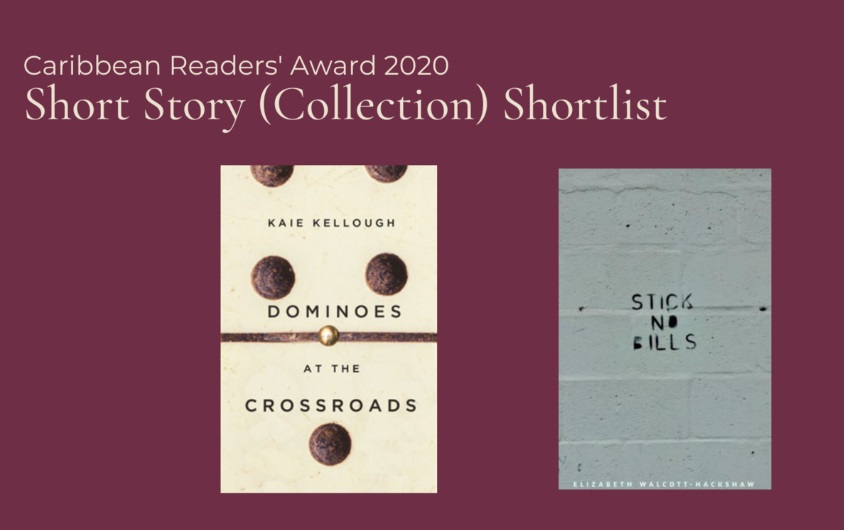 Hackshaw is a University of the West Indies french literature and creative writing professor. “Stick No Bills confirms Elizabeth Walcott-Hackshaw’s lethal talent for inventing characters – like the journalist who has been pursuing a famous writer at a literary conference in Haiti, or the would-be writer who is finding a workshop less than rewarding – who have only a partial awareness of their ability to deceive themselves, or see the painful humour of their situations.” – Peepal Tree (Source – originally John Robert Lee email blast followed by independent research)

This blog is maintained by Wadadli Pen founder and coordinator, and author Joanne C. Hillhouse. Content is curated, researched, and written by Hillhouse, unless otherwise indicated. Do not share or re-post without credit, do not re-publish without permission and credit. Thank you.