One of my kids had a project on Robert ‘Bobby’ Margetson. I realized while trying to help with research (and no, research isn’t just calling up the family, not when you’re talking a class or more full of children all chasing down the same information) that as large as Bobby Margetson is in my memory, it’s hard trying to pull information together on him (on so many of our Antiguan and Barbudan cultural icons, really) using these internets. I’ve been speaking this for a while, but, in this regard, we need to do better. Not just be consumers but creators of content when it comes to the internet and from a policy standpoint be committed to documenting our culture and our history.

I couldn’t find a picture of Bobby Margetson, but this is his late daughter Keva Margetson, who in her time on this earth was one of the biggest champions of celebrating and canonizing our culture. In this picture she’s posing with the flag and dressed in the colours of our national dress; this picture is quintessentially her – I have to believe she got some of that love of culture from her daddy.

Since I invested the time, I’m going to post some of the information I dug up  around these internets about Mr. Bobby Margetson (RIP), who when I was coming of age in 1980s Antigua and Barbuda, was host of one of the most popular local TV programmes, Top of the Form – a quiz style show pitting school against school.

Before that though, he was the writer (lyricist, not sure about the composition of the music) of one of my favourite national songs, God Bless Antigua. I stand to be corrected but I believe that this was runner up for the competition to select a national anthem when we (Antigua) achieved Associated Statehood status (with England after centuries off colonial rule) in 1967 (we wouldn’t gain full political Independence until 1981 but ’67 is a significant milestone in the history). ‘God Bless Antigua’ may not have won an official place in that history but it’s still sung and beloved to this day.

According to the Cambridge Guide to Theatre, as previously referenced on this site, in our posting on Antiguan and Barbudan playwrights, Bobby Margetson led The Little Theatre which presented Caribbean plays. The Guide specifically mentioned two by Antiguan playwright Oliver Flax, The Legend of Prince Klaas, which was entered in CARIFESTA in 1972 and 1976’s A Better Way, which was directed by Edgar Davis.

The site that had the most information was The Case run by Ken Kentish, which seems to be dedicated to revisiting precedent setting legal cases in Antigua and Barbuda – cool concept and right in line with what I said about creating and not just consuming content. It referenced his prominence in our lifetime as a radio and TV personality – especially, for us young ones at the time, as host of Top of the Form; noted that he was born in Montserrat in 1928 to a medical doctor who moved to Antigua in 1947 (Hmmm is that the Dr. Margetson for whom the Margetson ward at the old hospital, Holberton, was named. Maybe we need a medical blogger to document that.).

“Less well known is that there was an attempt to deport him from Antigua in 1966,” Kentish reports in his set-up to the case. He noted that Margetson became a civil servant and then in 1956 left Antigua to study in England, where he married and started his family. When, the family re-settled in Antigua in 1965, Margetson continued to move freely without need for a work permit, according to the blog. But then in Christmas 1966 he was told that he had to leave by February 1967  and would need a work permit to work in Antigua; he applied and was denied. With Sydney Christian representing him, he took the case all the way to the Court of Appeal which decided that the authorities had acted unlawfully in restricting his movements. Why did this make The Case? “The case is still significant today. The powers available to the immigration authorities must be used for a lawful purpose. Anything less does not belong in a democratic society.” So, there you have it a, for me, little known fact that Margetson was not just a songwriter and radio-tv personality but key actor in a precedent setting case.

The case is referenced as well in John Lent’s book on Third World Mass Media and Their Search for Modernity: the Case of Commonwealth Caribbean 1717-1976. Lent reports that in 1968  Margetson, as a broadcaster, read a story on ZAL-TV/ABS TV about the ouster of a government minister and that’s what resulted in him being kicked out of the island (with the work permit being used as the reason). I’ve just added this note to the previously posted History of Antigua and Barbuda media.

I seem to remember Bobby Margetson also worked with the Culture Department researching folk iconography; that’s how I’m remembering him in his later years (say, the 1990s), though I can’t find specific reference of that online (so, grain of salt).  Though I do vaguely remember a conversation with his now late daughter Keva, whose own work in their area of cultural celebration (e.g. with the Vitus Cultural Performers) I came to respect, in which she spoke of someday publishing his research. I’m not sure what has become of that project (or if I’m even remembering that right). But since I’ve touched on Keva, it would be remiss not to note that one of Margetson’s greatest contribution would be his offspring – from the likes of Keva and her work in culture (notably Carnival and Independence), to Robin and his contributions to pan with both Gemonites and Panache, to grand-offspring, Keva’s daughter, Patrice, who is a singer and media personality, as host of the ABS TV morning show. 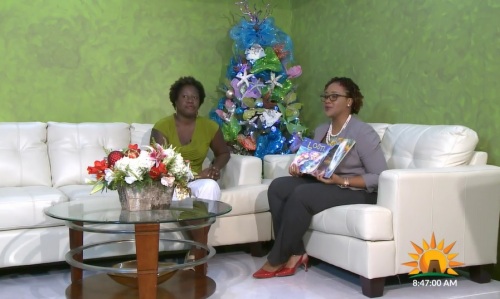 Screen capture: That’s Patrice to the right, holding copies of my children’s books (With Grace and Lost! A Caribbean Sea Adventure) during a promotional December 2017 appearance on ABS TV.

I’m sure there are many gaps in this accounting (and perhaps there is an even more comprehensive accounting of the life of Bobby Margetson out there and my google-fu is just failing me) but as this site has done with the likes of Marcus Christopher, Roland Prince, X-Saphair King, and others, we try to pull together what we can towards putting the names of our Antiguan and Barbudan artistic icons in our record.

As with all content (words, images, other) on wadadlipen.wordpress.com, except otherwise noted, this is written by Joanne C. Hillhouse (author of The Boy from Willow Bend, Dancing Nude in the Moonlight,  Oh Gad!, Musical Youth, With Grace, and Lost! A Caribbean Sea Adventure). All Rights Reserved. You can also subscribe to and/or follow the site to keep up with future updates. Thanks. And remember while linking and sharing the links, referencing and excerpting, with credit, are okay, lifting whole content (articles,  images, other) from the site without asking is not cool. Respect copyright.

Filed under A & B Lit News Plus, Links We Love, Literary Gallery