N.B. I usually try to upload all content in a single post but that’s not possible this time. There’s other stuff I need to add to this but, in light of some time specific items, I’m posting the incomplete version. I will have to add remaining items a bit at a time. So come back for updates throughout the month of April. Who knows, that may be the new posting protocol for this series. After all what is this COVID-19 period of life about if not making adjustments. – JCH, Wadadli  Pen founder, coordinator, and blogger

Antiguanice.com, a long time Wadadli Pen patron, has a regularly updated data base of COVID-19 advisories for Antigua and Barbuda. It includes curfew guidelines and information re the emergency food assistance programme. It’s important during this time to remember to err on the side of caution; too many people are still out here being too reckless. This is serious and the sooner we comply, the sooner we can beat this thing and smell the sweet perfume of freedom. So #stayhome, social distance (including standing six feet apart, not letting people in to your home and on the flip side not going in to people’s homes), wash the reusable bags you take to the shop, disinfect/sanitize everything, including labels/packaging on delivered or bought items, counter tops and yourself regularly, etc. And to quote the Antiguanice April 4th 2020 newsletter, “to summarise:

The world is in a strange, disorienting place. Let’s keep our eye on the ball. Stay home. Keep busy. Create. Connect. Do what you can to keep your spirits up. This too shall pass.

The judging team (consisting of Floree Williams Whyte, Glen Toussaint, and Danielle Boodoo-Fortune) have decided on the winners. I have been prepping the winning story posts and working out prize distribution, preparatory to following up with the partners (Barbara Arrindell, Devra Thomas, Margaret Irish, and Floree) and patrons. Things have changed drastically since the 2020 Challenge launched in January. We don’t know which patrons will be able to honour their commitments, we haven’t worked out how recipients will receive their prizes and when, though I anticipate we will, in the short term, proceed with the announcements – virtually. We just need to work out the details. I am excited to report that the judges were pleased with this year’s submissions and unanimous about the choices made. That said, there are surprises this year, as the breakdown is different than any past Challenge, and the winning pieces are startlingly relevant. We love to see it. And we’ll keep you posted.

The programme which premiered on @bocaslitfest’s Instagram Live (which has quickly become the COVID-19 era virtual concert hall) features readings with familiar and new Caribbean authors across the region and diaspora. As  noted in their email, it’s an opportunity “to get to know the faces behind the words and what’s on their bookshelves. It’s also an opportunity to share comfort, laughter and insights to help get us through these uncertain times.” We, of course, asked a follow up about bookings (as, no doubt, this will be of interest to authors local and beyond), and Nicholas Laughlin, Bocas’ programme director explained, “in this first phase we’ll be focusing on writers with new/recently published books, alongside writers longlisted for this year’s OCM Bocas Prize. Many authors with new books are finding it challenging to promote their titles at the moment, with launches and readings cancelled, bookshops closed etc. We’re trying to lend some support over the coming months by organising these online events, until circumstances allow festivals and launches to resume.” Read about it here.

Books that Made us #MyCaribbeanLibrary

Another great initiative out of Bocas, which, as we have reported elsewhere in this edition of the Carib Lit Plus series (a coalescing of all of the Caribbean lit news coming to my inbox, social media, ear, and elsewhere) has been postponed, is the 100 Caribbean Books that made us series. I actually remember a similar thread over at the unfortunately dead Caribbean Literary Salon (I remember Earl Lovelace coming out on top in that conversation). Who or rather which book or books will rise to the top this time – though it’s less a competition, more an opportunity to share. And share you must if you want to see books that have moved you included. Don’t lament the absence of Antiguan and Barbudan books, for instance, if you don’t weigh in with your selections. I know I plan to discuss my faves on my youtube channel – though as with the Reflecting on Seminal Works sub-head below, I’ll need to think on it. So think on it and weigh in, here’s the link.

Caribbean Reads Publishing (publishers of my own Lost! A Caribbean Sea Adventure and its Spanish language edition Perdida! Una Aventura en el Mar Caribe, and of my Burt Award winning teen/young adult novel Musical Youth) is one of several publishers/authors who have gotten (more) active online. I say more active as virtual launches, blog tours, not to mention booktube, authortube, and all the rest of it is not new; but it’s getting some miles on it in this lockdown period as people practice social distancing, and under stay at home orders, find ways to beat boredom. The arts, once again, to the rescue. Check out this chapter from the Caribbean Reads online reading series, and when you’re done that one, look for more, and when you’re done purchase the books add them to your home library, gift them to others, pass them on, and support the authors in our community.

Interviewing the Caribbean is a literary journal founded five years ago by Jamaican writer Opal Palmer Adisa. The journal is now published by the University of the West Indies Press and has for its current issue a co-editor in Jamaican writer Juleus Ghunta. The theme of the current is Caribbean Childhood: Trauma and Triumphs Pt. 2 (Pt. 1 included the 2018 poem Damarae and an interview with Wadadli Pen finalist Rosie Pickering). This issue has as its cover image the cover (used courtesy of publisher Little Bell Caribbean) of the children’s picture book With Grace by Wadadli Pen founder and coordinator and author Joanne C. Hillhouse, who is also interviewed in the issue.

The artist is Cherise Harris of Barbados. The issue is dedicated to another Barbadian, one of the leaders of Caribbean letters Kamau Brathwaite who died in 2019. The issue consists of, among other things, art by Jamaica’s Elpideo Robinson (Nature’s Shelter); essays by Anansesem Caribbean children’s lit journal founder and former editor Trinidad’s own Summer Edward (The Nature of Belonging: Making a Home for Children’s Literature in the Caribbean’s Literary Landscape) and Caribbean Reads publisher Carol Ottley-Mitchell (Reflecting the Realities of Caribbean Children); interviews with Jamaican scribes Olive Senior, Kei Miller, and Tanya Batson-Savage (also a publisher); creative works and interviews by Jamaica’s Pamela Mordecai, Tanya Shirley, and A-dZiko Simba Gegele, Barbados’ Linda M. Deane, Trinidad’s Marsha Gomes-McKie, Yvonne Weekes, and Antigua and Barbuda (and Wadadli Pen’s) Barbara Arrindell who shares a story entitled ‘Scholarship Child’.  Interviewing the Caribbean will  be accepting submissions for its Winter 2020 issue between June and September 2020. A tribute issue for Kamau Brathwaite is also in progress; submissions currently being accepted.

Tobagonian M. Nourbese Philip has won the PEN/Nabokov Award for Achievement in International Literature. The US$50,000 award is conferred on a living author whose body of work represents the highest level of achievement, and is of enduring originality and consummate craftsmanship. The African-Canadian author published her first book in 1980. Read about Philip and other 2020 PEN winners.

Reflecting on Seminal Works of the Last 20 years

I’ve been trying to prompt this discussion on my facebook page – what singular Antiguan-Barbudan/Caribbean work of the last 20 years has most touched or transformed you personally while also moving the culture either through its creative innovation, topicality, or just plain brilliance. I’m talking the work that you would put in a national collection or a time capsule as something that should not be lost to memory and time. I was prompted to raise this question by an article entitled The African-American Art Shaping the 21st Century in the New York Times that posed this question to top African American artists. Billy Porter chose his own TV show Pose, playwright Tarell Alvin McCraney chose a dance piece Grace by Ronald K. Brown – a 2000 production by the Alvin Ailey dance company, choreographer Kyle Abraham chose D’Angelo’s Black Messiah, Oscar winning Moonlight director Barry Jenkins chose Solange’s 2016 album Seat at the Table, The Daily Show correspondent Jaboukie Young-White, meanwhile, chose Jenkins’ Moonlight, author and academic Jesmyn Ward chose Outkast’s last big album so far Speakerboxxx/The Love Below released in 2003, writer Ta-nehesi Coates chose Kendrick Lamar’s good kid/m.A.A.d City (do you notice a pattern with writers choosing music? I find that very relatable).  I wanted us to reflect on it but from a local and regional (Caribbean) mindset – because that’s what we do here. Heads up, I posed this question to the subject of my next CREATIVE SPACE column, so check there soon for (spoiler alert) her answer. If you’re reading this, what’s yours? Answer in the comments. 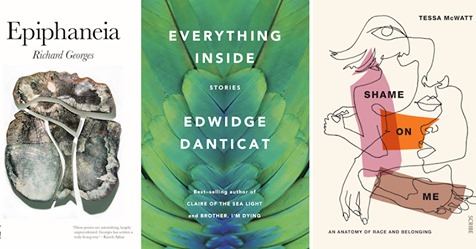 It’s quickly become the Caribbean prize to aspire to because of its prominence (associated with Trinidad and Tobago’s Bocas Literary Festival), sizable purse (US$10,000 main prize) in  a region with limited prizes of any type, and the pedigree of writers who’ve claimed the prize thus far (first poetry and main winner was Nobel Laureate the late Derek Walcott of St. Lucia and last year’s poetry prize winner – and current Wadadli Pen judge – TnT’s Danielle Boodoo Fortune). This year, the ones who’ve been tapped are poetry prize winner Richard Georges of the BVI for his third collection Epiphaneia; in fiction Haitian-American writer Edwidge Dandicat for her short fiction collection Everything Inside; and in non-fiction Tessa McWatt, originally from Guyana, resident in the UK, for her meditation on race, identity, family, and migration, Shame on Me. The winner will be announced on May 2nd 2020 online as the Bocas Lit Fest has been postponed due to COVID-19.

The annual programme typically runs from August to November in the US; the application deadline is April 7th 2020. It’s open to writers between 21 and 65 who have a publishing record. More details and other opportunities can be found on the Wadadli Pen blog’s Opportunities Too page. The blog’s main Opportunities page is also being constantly updated.