A & B Arts Roundup

Linisa George’s Brown Girl in the Ring featured in Shakespeare in Paradise in the Bahamas. “Erin Knowles, one of the directors of Murder & Poetry, came across George’s piece as a feature in a 2014 Tongues of the Ocean issue that focused on art and literary works from Antigua and Barbuda. Knowles felt instantly connected to George’s poem and had this to say about her choice to have Brown Girl In The Ring included in her production, “The piece focuses on the element of identity and coming to terms with that which we should be proud of. I think it’s an excellent piece to be included in my production because of the language and references to the ring-play that we idolized as young children.” Brown Girl in the Ring is being performed in the round alongside other poems that align with the goal for Paradise Unmasked.” Read more.

Couple weds… “In lieu of gifts the couple requested monetary contribution in support of programs and services of the National Public Library in Antigua and Barbuda. A total of seven thousand-two hundred dollars ($7,200.00) was collected.” Read more. 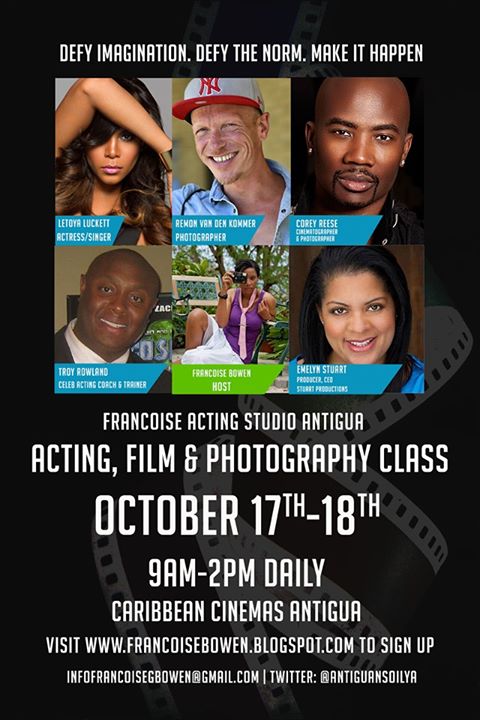 See her blog for details.

“I saw this as an opportunity to challenge myself.” – Antiguan and Barbudan artist Mark Brown on his participation in the “international collaborative organized by Shackles of Memory, a cultural tourism program that seeks to call attention to slave trade sites and encourage artists to create pieces for exhibition…part of TOSTEM, the French acronym for Cultural Tourism through the Footsteps of Slavery.” Read more.

“The two day workshop attracted 25 persons from the fields of design, writing, music and small businesses and covered the following areas: Overview of Crowd Funding and Social Media Marketing; Opportunities in e-Business for OECS SMEs; Crowd Funding Yesterday and Today; How to run a successful Crowd Funding campaign and the work of regional Crowd Funding platform Vision Funder based in Barbados.” Read more.

See which Antigua-based filmmaker made out at Caribbean Tales. See.

The Antigua and Barbuda Independence programme has been posted and the arts (visual, fashion, singing, music, drama, dance, pan, culinary etc.) are present-please (there’ll even be two days of car racing)…always happy to see the arts represented as they are the best representation of who we are (the arts are as necessary as air to me; yes, that’s how passionately I feel about it)… but no need to check it twice, the lit arts are in fact once again absent (the last lit art contest ended in 2011 with a stirring presentation by the then competition coordinator who recommended a way forward that seems to have fallen on deaf ears… and the Antigua and Barbuda International Literary Festival which was near the head of the pack when it started in 2006 was rumoured to be returning this year after an absence of about five (?) years but like most rumours… well…peep the schedules for yourself) …meantime we can give props to Barbuda for the inclusion of poetry at least in its programme…might be time for a visit to the sister island). But, see below, it’s not formally a part of the programme but the groups and individuals which continue to hustle outside the system aren’t sleeping on the literary arts.

Don’t forget, one of the things I try to do on this site is alert you to Opportunities (for grants, publishing, etc.) and taking it one step further, nag you re upcoming deadlines. This one, Stories Handed Down is specific to Antigua and Barbuda. Get on that.

Sharing some thank you’s from my blog re my participation in the Brooklyn Book Festival: thanks to “the organizers of the Brooklyn Book Festival for inviting me, Musical Youth publisher CaribbeanReads for making it happen, …Beverly George and the Friends of Antigua Public Library …, my co-panelists for a wonderful shared experience, Caribbean Cultural Theatre for all they do to promote the artistes from the region, everyone who came out, family, friends etc etc …and not just thanks but big big props to talented Antiguan and Barbudan designer Miranda Askie of Miranda Askie Designs for outfitting me (in jewelry and clothing) for the event…” Haven’t read the blog or seen the pictures yet? Check it out.

As with all content on wadadlipen.wordpress.com, except otherwise noted, this is written by Joanne C. Hillhouse (author of The Boy from Willow Bend, Dancing Nude in the Moonlight, Fish Outta Water, Musical Youth, and Oh Gad!). All Rights Reserved. If you enjoyed it, check out my page on Amazon, WordPress, and/or Facebook, and help spread the word about Wadadli Pen and my books. You can also subscribe to the site to keep up with future updates. Thanks.

The release below comes courtesy the Caribbean Tales International Festival. We have taken the liberty of shouting out Antigua and Barbuda’s win/s by putting it/them in bold. Hint: it’s Alexis Andrews whose film Vanishing Sail we’ve covered here on the site.

This year 16 feature-length and 35 short films in Official Competition, including dramas and documentaries from 25 countries covering all genres and themes, screened over 10 days at the Royal Cinema in Toronto.

The 2015 Incubator Program that took place over 6 weeks, including a 5-day intensive workshop in Toronto, focussed on the development of sustainable long-running series, and featured 10 teams of filmmakers from the Region and Diaspora.

Mariette Monpierre, winner of the Audience and Jury awards at the CTI Big Pitch with Lucie Carette and Julien Lamy of the French Consulate, which sponsored her participation in the event.

In announcing the awards CTFF Executive Director Frances-Anne Solomon said: “CaribbeanTales’ mandate is to build capacity in our region for the creation and distribution of film and television content that reflects the wide diversity of Caribbean stories worldwide. Through our festival and Incubator Program we seek to celebrate strong indigenous high quality content.”

She continued: “It is important for us to recognise and support the filmmakers who achieve this work despite little or no financial or infrastructural support from governments of the region. These intrepid warriors overcome odds, make great sacrifices and rarely earn a living wage from their efforts. We salute their passion, dedication and integrity.”

Supported this year by the REACH Project of the Inter-American Development Bank, Telefilm Canada, the French Consulate in Toronto, and the St Lucia Tourism Board, the CTI Big Pitch took place at the TIFF Bell Lightbox on September 13th.

For a film that contributes to a deepening understanding of Caribbean culture and life. 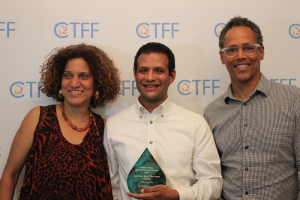 For a film that reflects, engages and impacts on issues of contemporary relevance to Caribbean people worldwide.

– The Price of Memory by Karen Mafundikwa

CaribbeanTales thanks all sponsors, partners, hosts, audiences, and friends for a wonderful festival season.

CaribbeanTales is a group of media companies that produces, markets and exhibits Caribbean-themed films for regional and international distribution, including: the  CaribbeanTales International Film Festival that produces an annual festival and events year-round in Toronto, Canada; the Caribbean Incubator Program for Audio Visual Entrepreneurs a training and marketing platform that aims to create strong original world-class content for the international market, and CaribbeanTales Worldwide Distribution, the only dedicated full service film sales company for Caribbean-themed content linking producers and buyers of quality entertainment.

UPDATE! UPDATE! Melissa Gomez, the Antiguan and Barbudan producer of the documentary film Silent Music, reports that not only did her film debut to a full house, it also walked away with the award for Best Documentary at Caribbean Tales 2012. Of the response to the film, she said, “Instead of misunderstanding my motivations for telling such a personal story (one of my fears) – it appears that the audience fell in love with my parents, the main characters of the film. What more could I ask for??” Of receiving the award, she said, “Words can’t explain how amazing it feels for the first response to this labor of love to have been so positive.”

Then followed three intense days of the CaribbeanTales Market Incubator
where I honed the “perfect pitch” for the film, pairing up with mentors in the
film industry and finessing the business plan for marketing and distribution.
Wednesday’s highlights included the opening launch gala of the 2012
CaribbeanTales Film Festival with the screening of the British-Barbadian
documentary, “The Story of Lovers Rock”. Next up were two intense days of
TIFF’ing with Sales & Industry pass in hand, while the culmination of the
incubator happened on Sunday: the ultimate pitch to a panel of industry
professionals at the TIFF Bell Lightbox. The guest list included
representatives from Berlinale, NFB (National Film Board of Canada), Telefilm Canada,
CBC, and Ventana Sur – no pressure there!

To put the icing on the cake, in the midst of the incubator and TIFF
networking awesomeness, and in anticipation of the September 15th
World Premiere, Silent Music was featured in an interview on CHYR (Toronto)
radio and in this week’s edition of “Share”, a local Toronto newspaper
aimed at the Caribbean Diaspora (yep – that’s me on the front cover!) –
http://sharenews.com/antiguan-filmmakers-silent-music-a-very-personal-journey/

All in all – many new friends and several amazing films and experiences
later – I can’t think of a better way to have kicked off the countdown to the
World Premiere of Silent Music: just 4 days left!

CaribbeanTales is just starting to heat up, so be sure to check out the full
calendar of CaribbeanTales 2012 events at: http://caribbeantales-events.com/

Tickets to the World Premiere of Silent Music are available (but not for
long!) at: http://tickets.harbourfrontcentre.com/calendar/view.aspx?id=18889

Silent Music is the first feature-length documentary
directed and produced by Melissa A. Gomez. The film follows Melissa, a hearing
daughter of deaf parents, on a very personal journey as she investigates the
silence and lack of communication that define her Antiguan family. Through
difficult confrontations and unexpected revelations, the film celebrates the
love of family while also forcing both Melissa and the audience to answer a
difficult question for themselves: ‘Are some secrets best left hidden?’

“Characterised by a disarming balance of the coy and a commitment
to honesty and openness, Silent Music, seemingly effortlessly, but with great
determination and compassion, walks a well judged line between the universal
and the particular, the ordinary and the extraordinary, the filmmaker’s own
life and that of her subjects.”

Filed under A & B Lit News Plus, Caribbean Plus Lit News, Links We Love

Silent Music, the first feature-length documentary by Antiguan filmmaker Melissa A. Gomez, will have its World Premiere on September 15th at the 2012 CaribbeanTales Film Festival in Toronto, Canada. The documentaryfollows Melissa, a hearing daughter of deaf parents, on a personal journey as she investigates the silence and communication breakdown that define her Antiguan family. What results is a story that, “with a mixture of humor and compassion… uncovers something universal about the intricate and profound nature of long term relationships,” says A.C.E film editor, Plummy Tucker.

Read more on what will surely be Melissa’s breakthrough film (yeah, it’s that good!) here.

Filed under A & B Lit News Plus, Caribbean Plus Lit News, Links We Love