This picks up where the previous installments of Antigua and Barbuda Literary Works Reviewed pages left off (use the search feature to the right to dig them up). As with those earlier pages, it features reviews about A & B writings that I come across as I dig through my archives or surf the web. You’re welcome to send any credible/professional reviews that you come across as well. They’re not in any particular order, I just add them as I add them; some will be old, some will be new. It’s all shared in an effort to underscore, emphasize, and insist on Antigua and Barbuda’s presence in the Caribbean literary canon. 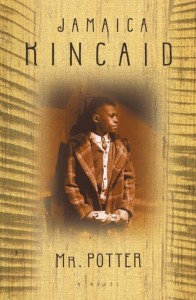 “As in her previous books, Kincaid has exquisite control over her narrator’s deep-seated rage, which drives the story but never overpowers it and is tempered by a clear-eyed sympathy.” – Publisher’s Weekly reviews Jamaica Kincaid’s Mr. Potter 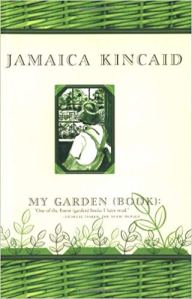 “Kincaid (who last year edited the anthology My Favorite Plant) shuttles constantly and with ease between the practical, technical difficulties of gardening and the larger meanings it makes available.” – Publisher’s Weekly reviews Jamaica Kincaid’s My Garden 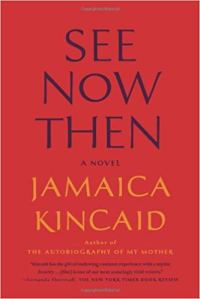 “In her first novel in a decade, Kincaid (Autobiography of My Mother) brings her singular lyricism and beautifully recursive tendencies to the inner life of Mrs. Sweet, who is facing the end of her marriage, and who, over the course of the book, considers the distinctions between her nows and her thens, particularly when recounting what was while the memories bleed with a pain that still is.” – Publisher’s Weekly reviews Jamaica Kincaid’s See Now Then

“This is a slim book but Kincaid has crafted it with a spare elegance that has brilliance in its very simplicity. Lucy’s is a haunting voice, and Kincaid’s originality has never been more evident.” – Publisher’s Weekly reviews Jamaica Kincaid’s Lucy

“This send-up of the Nancy Drew mysteries by Kincaid first appeared as a 1980 New Yorker story about a gala celebrating the 50th anniversary of the first book’s publication. Here, Kincaid’s piece is recast as a picture book with dramatic artwork by Cortés…Detailed, almost photographically realistic portraits of girls and partygoers by Cortés, shown against marble architectural backdrops that suggest the New York Public Library, engage throughout…A gem.” —Publishers Weekly reviews Jamaica Kincaid’s Party: a Ministry 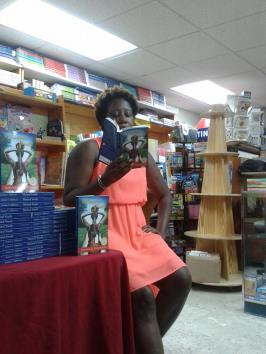 “From the first pages, we are witnessing the ravages of colorism. It plays on the perception we have of ourselves, it plays on our perception of others and on the perception that others have of us. The subtlety of Joanne Hillhouse has been to address the issue from several points of view by highlighting different aspects depending on the character involved.” – Musical Youth reviewed by My insaeng, ma vie (My insaeng, my life)

“Featuring an attractive pair of lovebirds, Dinner is a sweetly poetic and vivid 12-minute verse-to-screen clip from an Antiguan writer/director with an appealing, if slightly provocative, voice. It’s a small film with a big heart that explores intimate love, employing a slyly clever approach – cloaked in the guise of meal preparation. While getting dinner ready a radiant young lady (played by Jarvis-George, who also provides a lyrical voice-over) is surprised by the early arrival home of her virile Rastafarian man, and before you can say ‘Come and get it’ a dining of a totally different variety plays out on-screen. Shot in vibrant hues by a surprisingly steady camera, Dinner is romp that ends all too quickly, but it was tastefully delightful while it lasted.” – Tallawah magazine on the Tameka Jarvis-George penned, voiced, and acted, short film, directed by Christopher Hodge and filmed and co-produced by Cinque Productions. Watch the whole film here.

“an entrancing sensorial experience, an impressionistic assemblage of assorted shots of people, places, and things…Dadli draws its power from the cumulative effect of its imagery, the camera capturing everyone and everything it sees with a piercing empathy.” – Caribbean Beat on Shabier Kirchner’s short film Dadli

“Phillips keeps the pages turning with an easy yet exacting style and keen observations.” – The Atlantic reviews Rowan Ricardo Phillip’s The Circuit 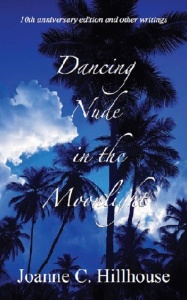 ‘What makes the book a true pleasure is its political edge. Hillhouse arms the characters with larger social conflicts that far outshine the romance. Selena personifies the uphill struggle against sexism, violence, and stereotypes placed on Latin women in predominantly Black Caribbean countries: “that they all looked and dressed like whores, all wanted their men (as if…!) and were good for nothing more than a wild night.” Michael is the target of shadeism and anti-Black racism from members of Selena’s and his own family — all while struggling to keep employed amidst government corruption and few economic options on the island.’ – Broken Pencil reviews Joanne C. Hillhouse’s Dancing Nude in the Moonlight: 10th Anniversary Edition and Other Writings