A number of Caribbean authors and illustrators, including some from Antigua and Barbuda, have signed on to produce books for the Collins Big Cat series of children’s books. I am one of those authors – and my book The Jungle Outside, (ETA cover) 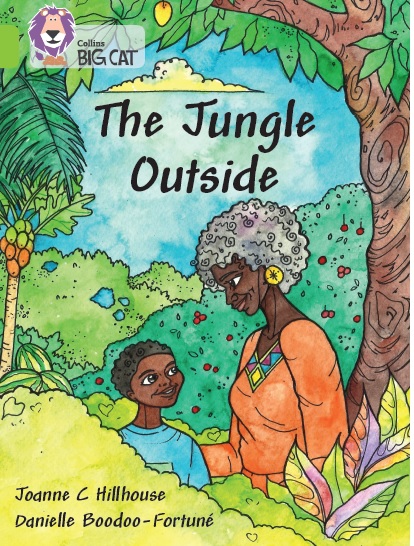 illustrated by Trinidad and Tobago’s Danielle Boodoo Fortune, who also created visuals for my Caribbean Reads edition of Lost! A Caribbean Sea Adventure, is among books in the series (my only book under contract with Collins) that are already being promoted online. Let’s check them out.

Each book has the following preamble: “Collins Big Cat supports every primary child on their reading journey from phonics to fluency. Top authors and illustrators have created fiction and non-fiction books that children love to read. Book banded for guided and independent reading, there are reading notes in the back, comprehensive teaching and assessment support and ebooks available.”

The series is international and I remember when Collins reached out to Caribbean writers and requested recommendations of Caribbean illustrators (a number of which I was happy to recommend); so it’s good to see it coming to fruition. My particular book, per the official synopsis, “tells the story of Dante and his grandmother, Tanti, as they explore Tanti’s garden. At first reluctant, Dante soon comes to realise the adventures that await him outside and we follow them as he climbs trees, tastes fruit, and finally notices the nature around him…It encourages children get outside and explore, to look at things differently, and to face their fears.” This book is about 142 days away from its publication date – and it’s been interesting going through the development process for this book, a book about exploring outside, in a time when kids don’t even get outside recess anymore (here in Antigua) because we’re trying to keep them safe. Here’s to a day when children are once again free to explore. The book is scheduled for release in March 2021.

Now, the others. I know there are more than mentioned here; so forgive (and inform) me if I missed any.

Turtle Beach by Barbara A. Arrindell (local author, bookseller, and part of Team Wadadli Pen) with illustrator, also from Antigua and Barbuda, Zavian Archibald is forthcoming in June 2021. Per the official synopsis: “A young girl is excited to be going to a restaurant to celebrate her birthday with her parents. While she’s there, she sees baby turtles trying to find their way to the ocean. It’s a magical event to witness, but she also learns how humans can interfere with the journey of the hatchlings and why they need to take actions to help them reach the water. This beautifully illustrated book is a story that raises awareness of how simple acts can impact vulnerable creatures like turtles. While this is a story set in the Caribbean, it’s one that goes beyond the Caribbean and highlights environmental issues of interest to everyone.”

It’s described as the story of “a rare fairy fish living on a Caribbean coral reef. He has never seen another fairy fish, until one day he sees himself in a conch shell mirror and realizes he is different from everyone else. Finny believes he is ugly and worthless, but his friends persuade him to leave the reef and journey to the deep sea where an elder dolphin explains to him that difference it to be celebrated. Finny the Fairy Fish deals with themes of tolerance, belonging and celebration of diversity, using a Caribbean coral reef as the setting. The book introduces the types of creatures living on a reef and some of the threats facing the sea. It also encourages children to identify and talk about emotions.”

Due next March is Wygenia and the World Leaf by Trinidad’s Summer Edward, founding editor of the Anansesem online children’s journal. “When her beloved Grannie falls ill, ten-year-old Wygenia feels lonely and helpless. Then she learns about a healing plant so powerful it’s called ‘Wonder of the World.’ But will it really work? Set in the Caribbean island of Trinidad, this realistic fiction tale tells the story of Wygenia’s quest to restore her Grannie to the high-spirited companion she used to know.” It is described as a story that “evokes Caribbean traditions and customs in a non-stereotypical way.”

ETA (via Collins, I’ve learned that I missed): Sea Turtles by Carol Mitchell, a non-fiction book providing fascinating facts about these denizens of the sea, forthcoming November 2020; The Lost Sketch Book by Imam Baksh, about two friends finding a sketch book that can bring drawings to life, due February 2021; and, self-explanatory, How to Become a Calypsonian by Desryn Collins, also due in February 2021. Mitchell, originally of St. Kitts-Nevis, is, in addition to being an author, an independent publisher (Caribbean Reads Publishing) in her own right; Baksh is a multi-award winning Guyanese writer; and Desryn Collins, also originally of Guyana, serves as curriculum officer with the Ministry of Education in Antigua and Barbuda. Summer’s book is illustrated by another Trini Sayada Ramdial. I am informed there may be one other title but details are not yet available.

It’s a good thing to have stories from our own imaginings or own voices stories, so we’re happy to shine a spotlight on these books (and look forward to reading them – as I have some non-Caribbean books in the Big Cat series) and on all books for children including, per our on site bibliography, Antiguan and Barbudan Children’s Literature.

As with all content on wadadlipen.wordpress.com, except otherwise noted, this is written by Joanne C. Hillhouse (author of The Boy from Willow Bend, Dancing Nude in the Moonlight 10th Anniversary Edition and Other Writings, Oh Gad!, Musical Youth, With Grace, and Lost! A Caribbean Sea Adventure). All Rights Reserved. If you enjoyed it, check out my page on WordPress, and/or Facebook, and help spread the word about Wadadli Pen and my books. You can also subscribe to the site to keep up with future updates. Thanks.

Filed under A & B Lit News Plus, A & B WRITINGS, Caribbean Plus Lit News, Links We Love, Literary Gallery, The Business, Wadadli Pen News