Recently, I (Joanne C. Hillhouse of Antigua and Barbuda) reached out to three female Caribbean writers (Diana McCaulay of Jamaica, Lisa Allen-Agostini of Trinidad and Tobago, and Shakirah Bourne of Barbados) with whom I have in common the distinction of being a finalist for the Burt Award for Teen/Young Adult Caribbean Literature (Diana with Daylight Come in 2019 and Gone to Drift in 2015; Shakirah with My Fishy Stepmom in 2018; and Lisa with Home Home in 2017; my own Musical Youth was a 2014 finalist).

The three writers interviewed for this series have further distinguished themselves by selling rights to U.S. editions of their Burt books (McCaulay’s Gone to Drift released in the US market with Harper Collins in 2016; Lisa’s Home Home’s US edition landing in 2020 with Delacorte Press; and Shakirah’s book forthcoming in 2021 with Scholastic). I want to thank them for making the time because I believe their experiences, different though they are, are an education on publishing, especially if you’re a Caribbean Writer. The conversation is serialized due to length (so click here for the start of the series) – there are 5 questions.

Q. 5. I also want to touch a bit on the value of an author as a brand. How do you feel valued as a Caribbean author, how do you feel not valued? – re speaking fees, copyright etc. but, also, generally.

Lisa: I have always taken my branding seriously. I got married at 19 and took my husband’s last name primarily because there were other Lisa Allens out there writing and I needed a unique brand. Lisa Allen-Agostini is a hellishly long name but it’s one-of-a-kind. I built my brand as a creative writer alongside my brand as an arts journalist and critic. Since 2009 when I joined Facebook I began using that platform to post about my events and publications. I also post about literary events I attend and regional literary news. I got an Instagram account a few years ago and those work in tandem. I also have a blog which isn’t active at the moment. I’m not one of those shy writers who pretends their work hasn’t been published. I post everything, and I accept nearly every invitation to speak or read. I have intellectual capital from this brand-building, and I sometimes get asked to judge competitions, give speeches or sit on panels to discuss the creative arts. I participate in the Bocas Lit Fest annually, doing every reading or panel discussion I’m invited to do.

Diana: I don’t think of being an author as a ‘brand’ at all. I really distrust that characterization – plus I occupy a, let us say, somewhat uncomfortable position as a light skinned Caribbean writer of privilege. So the entire process of promoting myself and my work is very, very difficult for me – I wish I did not have to do it at all. I don’t think I’m particularly effective in front of an audience, and I hate saying to anyone – buy my book. Or: Laad, post a review, nuh!?

Lisa: I do get paid commissions to write pieces. I don’t usually get paid for speaking or reading (the Burt tour was an exception), though I might get a commemorative gift from the people who invite me. A lot of unpaid labour goes into being a writer. I can spend five to ten hours a week managing my social media–more if I have an event. The week of the Bocas Lit Fest I’d be gone all day, every day, attending readings and panels and photographing them, and lurking in the lounge to meet and network with publishers and other writers. 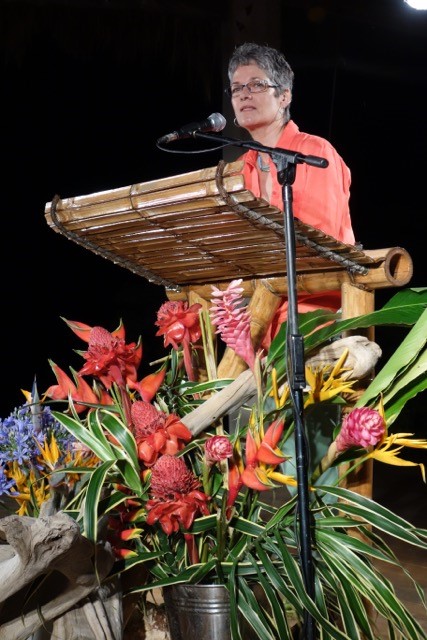 Diana presenting at the Calabash literary festival in Jamaica in 2016. by Cookie Kinkead.

Diana: Huge amount of unpaid work. Huge. I do get paid to write sometimes, I seek out those opportunities, but I would say it’s underpaid. I’ve never been paid for speaking as a writer, occasionally I’ve been paid as a competition judge or reader.

Lisa: I do feel valued, even cherished, as a writer. However, I wish we had a system of patronage so that writers could survive without having to hustle doing the kind of work that pays bills. People advocate the hustle. I don’t, but with no arts council funding in the region it’s impossible to avoid.

Diana: Do I feel valued as a writer? Hmm. Sometimes. Not often. But I’m also aware that writers tend to have huge amounts of insecurity about their writing, so it’s possible that my feelings of lack of value are more to do with my own weaknesses than an objective situation. But yeah, there’s no arts council support here and I think it’s true everywhere that only the mega stars can afford not to work at other jobs. I remember hearing Olive Senior once say that she wished she had more time to think, to dream, to create, and I do wish that too.

Diana with the last of the Burt Award finalists in 2019.

I also want to say that more recently, I feel optimistic about the success of Caribbean writers on the world stage, I started to list names, but then realized what a long list it is. I’m proud to be an editor for PREE, a new online magazine celebrating contemporary Caribbean writing. I’m glad we have our own festivals – a growing number too. So I’m happy to be a part of the Caribbean writing community.

Shakirah:  Joanne, in an article you once described me as “never doing one thing at a time, it seems, on the page or in life” and that is such an apt description. I started off in adult short fiction, but then became known for my comedy films, and now I’m venturing into children’s fantasy books; I am a marketer’s nightmare. However my brand has always been “authentic Barbadian stories” and I hope that readers, viewers, attendees, whoever, expect to be entertained and enlightened in some way when they consume my work.

The market is flooded with books and other content from Western media, so I’ve found that local consumers really value my Bajan stories, and international readers are excited to experience a different point of view. So whether it is an elderly Bajan woman laughing at the local cinema, or an email from a reader in the UK who is grateful for the little taste of home or an acceptance from an international publisher, I have always felt valued as a Caribbean writer.

I expect to be compensated for my time, especially for paid events, and I don’t depend on other persons to assign a value to it. It took a while, but I’ve become very comfortable in asking “do you have a budget?” Fortunately I’ve not interacted with many people who are surprised by the question. I appreciate when people are upfront about not having a budget and if I’m still interested, we discuss avenues for funding, or compensation in kind. When I’m invited to events, they usually cover all expenses and at least offer a per diem if they can’t afford speaking fees.

Still, there are few avenues for literary funding and for authors to make money from public speaking. For instance, in the US, earnings from school appearances can be significant; I was shocked at the average fees for a school author visit. Not many public schools here could afford a fraction of that price, but they do have supportive teachers who are happy to buy a certain amount of books. It may be a while before it is commonplace for an author to charge so much for a school visit, but in the meantime I try to partner with local cultural organisations to facilitate these sessions.

That’s it that’s the series – here are links to parts 1, 1.2, 2, 3, 4, and interviewer Joanne C. Hillhouse’s take, after some prompting, on her own questions. I’ve since made my answers in to an addendum to the series here on the Wadadli Pen blog – an unofficial part 6. Alternatively, you can use the search feature to the right to find earlier installments of these women breaking down their experiences in publishing. It’s worth noting that their published books are only one part of their CVs.

Lisa is a comedian and freelance writer,

Diana is an environmental activist; and

Shakirah is a filmmaker and consultant; and

I am a freelance writer and editor, writing coach and course/workshop facilitator;

and that’s only a part of it.

All images are courtesy of the authors and interview was conducted and published by Joanne C. Hillhouse. You can excerpt and share with link-back/credit but do not republish without permission.