Things I read that you might like too. For previous and future installments in this series, use the search feature to the right.

Read the winning entries to the 2020 Wadadli Youth Pen Prize Challenge which are a mix of poems and short fiction. Support our patrons.

“I was going to write to you last week but delayed
till I could add a bit of news that hadn’t quite resolved—
in a season of nest failures new nests have been made.” – Villanelle of a Passing of Harold Bloom by John Kinsella

“When the publishing industry — which is 84 percent white — tells Latinx writers that our stories are too hard to read, our worlds too complicated, our audiences too small, do they not mean this is hard for me to read, this book doesn’t reach me, it is difficult for me to bear witness to what my people have done, I don’t see myself in this story? Despite all its failings, American Dirt still made its debut at No. 1 on the New York Times Best Sellers list. Writers like Cummins will continue to supply these voyeuristic stories for the white imagination. And we will continue telling our stories as is natural for us to tell them.” – Ingrid Rojas Contreras writes about American Dirt

“As much as his scholarly writings chronicled the post-colonisation Caribbean experience, however, it is Brathwaite’s poetry that captured the imagination of both the region and the world.” – Barbadian Poet Kamau Brathwaite Leaves Behind A Legacy of Language (on Global Voices by Janine Mendes-Franco)

“She slept fitfully that night, and woke up the next morning with an inexplicable sense of loss. Retirement blues? She got out of bed and made herself a cup of tea. What was it that she had planned to do that morning? Yes, to go to David Sassoon library and borrow Usage and Abusage by Eric Partridge; go to church and meet Father Pereira; buy some groceries on the way back . . .” – Miss Coelho, English Teacher by Kiran Doshi

‘She had a habit of making lists in a small notebook. Lists of things she needed to do for the day, lists of the people she’d taken to shelters from the beach, even though she hadn’t gone there since rescuing him. The Coast Guard had become more vigilant and the landings had decreased. One day she read him something from the notebook. His name was the only one on a list she titled “People from the Beach I Have Kissed.”’ – Without Inspection by Edwidge Dandicat

“Elaine Potter Richardson (as she originally was) had been sent to New York from Antigua eight years before she met Shawn. Her stepfather’s failing health and the arrival of three baby brothers had drained the family finances. Elaine, a precociously bright child and a voracious reader, had been taken out of school and sent away to earn some money.” –Jamaica Kincaid: Looking Back in Anger in Caribbean Beat magazine

Bocas Lit Fest has readings for children on instagram as long as lockdown lasts. At this writing, they’re reading Carol Ottley-Mitchell’s Trapped in Dunstan’s Cave. Here’s the link.

Conversation and reading with Trinidadian writer Vahni Capildeo, who was the University of the West Indies St. Augustine writer in residence for Campus Literary Week (virtually due to COVID-19). A list at the end of video 1 sees Antigua and Barbuda’s Jamaica Kincaid making a curated list of top Caribbean female writers. Listen to hear who else is on the list – some we’ve discussed right here on the site. And, yes, we said video 1, the conversation is broken up in to several video clips – click the link above.

Caribbean American Perspectives Carry on Friends recommends ‘5 Must Read Fiction Books by Caribbean Women Authors’. See who made the list.

‘How can we support each other right now as readers and writers?

For me, it’s pretty simple. Buy books, read books, and probably number one—talk about books. It’s amazing how often the talk turns to television, even among literary people. I think it’s just habitual. First of all, it’s easier to find people who are watching the same shows. You can pretty much bet that if you say Tiger King right now—and look, I’m enjoying it, too, don’t get me wrong—but I ask of myself to always ask other people, “What are you reading?” And it’s interesting how it seems to lead to deeper discussion ultimately than “What are you watching?” And for all the great TV out there, honestly, I find that if it’s a choice between reading and watching, I read. It just feels like a deeper satisfaction and also a kind of insistence, in my own life anyway, on the importance of this practice. So I think, just keep literary culture alive by insisting upon its centrality. That’s what we can all do.’ – The PEN Pod: Keeping Literary Culture Alive Through Resilience with Jennifer Egan

“I experiment with new ways of writing. I try to get outside of my own box and I’m not afraid if it fails or doesn’t work.” – Sharma Taylor, exclusive interview with Jhohadli 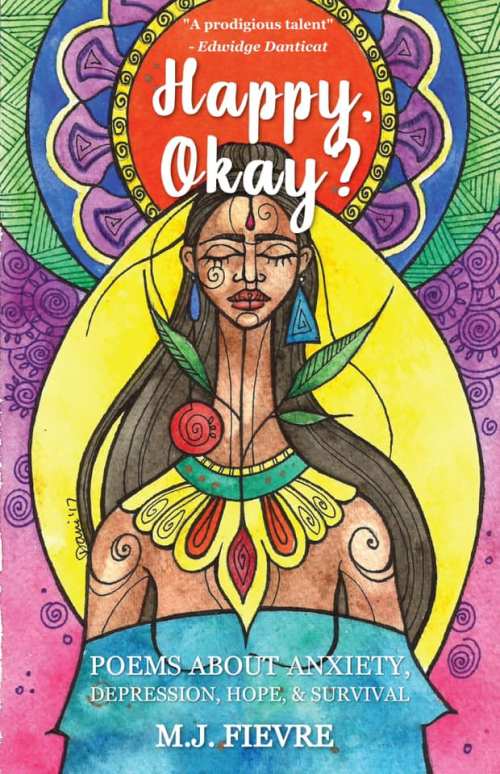 “Well, the funny thing about a culture of silence is that once the silence is broken, others find a connection, and begin to recognize there’s a problem, and that many people are suffering. Once that happens, more people start speaking up, and eventually, it becomes easier to speak of the unspeakable.” – Haitian-American writer M. J. Fievre in interview with me at my jhohadli blog about her new book Happy, Okay?

‘What my family ate, spoke, and did was a mystery to our neighbors and somehow it made us strange and foreign to them. I remember reading books when I was kid and not being able to relate to a single character because I didn’t look like them and my family didn’t do the things they did. I also couldn’t relate to characters in Chinese children’s books because well, I couldn’t read Chinese and stuff like “after I do my homework I help grandpa wash his feet in a water basin” didn’t relate to me.’ – Mina Yan interviewing Eugenia Chu, author of Brandon goes to Beijing and other books in the series of Chinese-American books for children inspired by her own son

“The novel is set in Trinidad, and it follows the lives of an unconventional family – Betty, a widow, her son Solo and their lodger Mr Chetan. You know why I’m sure sure you’re going to love them? Because I loved them. I let them do all kind of stupidness, but I always treated them with respect and empathy. In spite of all the madness we, like these characters, are all just trying to live our best lives.” – Caribbean author Ingrid Persaud talks about her book Love after Love

This blog is maintained by Wadadli Pen founder and coordinator, and author Joanne C. Hillhouse. Content is curated, researched, and written by Hillhouse, unless otherwise indicated. Do not share or re-post without credit, do not re-publish without permission and credit. Thank you.