This is a throwback to an article I did for the Calypso Association 50th anniversary magazine in 2007. In the interest of increasing awareness of the accomplishments of some of our iconic calypsonians and increasing appreciation for the art form, I figured I would share some of that issue with you. This particular article looked at  a quartet of repeat-repeat-repeat winners. in this post, I’ll share the section of that article focused on Ivena (as it ran, so some of the info will be dated), the first (and to date only) female in Antigua and Barbuda to take the Monarch crown and, proving it was no fluke, to dominate the previously (and subsequently) male dominated Monarch stage. Per her moniker, the sub-head was ‘The Razor Lady’. DO NOT repost without permission or credit. 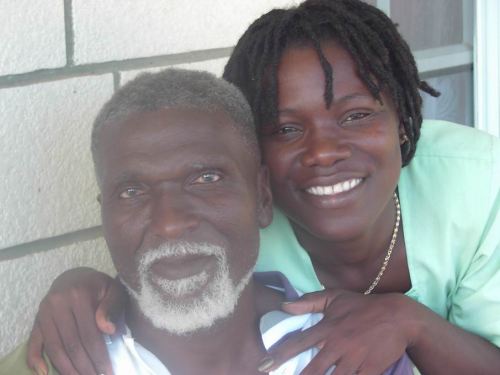 This is a picture I took with Ivena and her writer Best back when they were killing it. DO NOT publish or otherwise repost with out permission.

Diminutive in size, Ivena had a colossal impact when she shattered the glass ceiling that had long hung over Calypso, becoming, in 2003, the first female to wear Antigua’s Calypso monarch crown.  In all, she’s amassed three Calypso monarch crowns, five female Calypso queen crowns, a Leeward Islands crown, and a Caribbean monarch crown. For a time, she seemed unbeatable. “I was shocked to see the kind of passion that she sang with,” her writer Cuthbert ‘Best’ Williams told the Daily Observer in 2005, “and it’s really paying off, you know. People admire the passion that she sings with.” Of course, Calypso fortunes being what they are, she would subsequently fall in 2006 to main rival Singing Althea in the female Calypso competition, and fail to make the top three in the Calypso monarch competition.

Lena Philip announced her arrival in the Calypso Association’s 1999 competition during its rift with the Carnival Development Committee. “Her coming,” as Gisele Isaac wrote in 2006 “(precipitated) the most sparkling rivalry seen in ages, first on the female scene and then on the big stage.” That rivalry, of course, was between Althea and Ivena, and, at times it seemed, Ivena and everyone else who was trying to climb the insurmountable Everest she seemed to represent.

Of course, she herself had had to climb a few mountains to Calypso glory. She’s had to weather criticism of her vocal ability. Also, it was Empress, not Ivena who won the 1999, female crown – though Ivena went on to come second behind only Kublai and Zacari in the Calypso Association’s Monarch contest. She didn’t make the top three though in 2000, her first run at the ‘official’ female Calypso title. Two thousand and one’s unforgettable ‘Old Road Fight’, a ripped from the headlines saga, changed all that. It earned her her first female Calypso crown and a reputation of singing, with confrontational fervour, of and for the people.

“When de war drums roll
They calling old road heroes
— They calling Old Road heroes
Kublai Gracey Shaska – Baggas and King Larro
Young Gantone and Kubujah
Ras Waka and John Dyer
I say we fought that day in the spirit of Africa
Our ancestors, you know they were very proud
Ma Clemmie and Olive Humphrey was in de crowd
Lillian and daughter Nancy
Denon, Decade and friend Nicey
And soldiers like Miss Aggie
We will take over Wadadli…”

Ivena made no bones about her desire to be the first female monarch, but getting to play with the big boys did not come easily; and at one point the frustration saw her threatening to boycott the female competition in protest.

But, in the end, Ivena proved not only a fighter, but a victor.

She took on the power brokers.

“You find it hard
You can’t cope
Yet more millstone around your neck
And I hear Treasury broke
The economy is a wreck
Yet they borrowing more and more money
Pawning off all yuh land
Soon the whole ah de country
Might be sold to that blue-eyed Texan”
(Remember the Pledge, 2002)

Not only was the ‘Cry Cry Baby’ fair game but the then Prime Minister who came in for mockery in tunes like ‘I’m Angry’. As she told Dotsie Isaac Gellizeau in the November/December 2005 Essential, in which she was the cover girl boldly flashing her crowns, “to be a Calypsonian, you must have a strong heart.”

When old adversaries faded to the political sidelines during the 2004 elections, Ivena turned her attention to the new administration with winning tunes like ‘After Lester’ (in which she warned the new PM Baldwin Spencer, that she had her eye on him) and ‘Tell us What Castro Say’.

The crown may have slipped, but it’s fair to say, at this writing, that we’ve not heard the last from Ivena.

FYI, here’s a short cut to some other calypso related links on the site: this is a report from the launch of the book on the Monarch King Short Shirt by veteran calypso writer – Dorbrene O’Marde; an article on that book being short listed for the regional Bocas prize and why it matters; an article on Antigua’s King of the Road – Swallow; an article on Marcus Christopher – the late great calypso writer and key figure in the development of the art form and of Carnival locally; a piece on pre calypso pioneer Quarko; an article on Short Shirt’s documentarian and the birth of his film; a piece on Short Shirt’s 50th; the site’s evolving songwriters’ data base – dominated by, you guessed it, calypso writers; an article on King Obstinate; a reflection on Latumba; a review of Dorbrene’s book by D. Gisele Isaac; a video retrospective – King Obstinate; an article on bandleader and key figure in the development of the art form – Oscar Mason; Lesroy Merchant was, among other things, a calypso writer – we remembered him here on the site when he passed; Short Shirt article; my review of his classic Ghetto Vibes album

As with all content (words, images, other) on wadadlipen.wordpress.com, except otherwise noted, this is written by Joanne C. Hillhouse (author of The Boy from Willow Bend, Dancing Nude in the Moonlight,  Fish Outta Water, Oh Gad!, and Musical Youth). All Rights Reserved. If you enjoyed it, check out my page on Amazon, WordPress, and/or Facebook, and help spread the word about WadadliPen and my books. You can also subscribe to and/or follow the site to keep up with future updates. Thanks. And remember while linking and sharing the links, referencing and excerpting, with credit, are okay, lifting whole content (articles,  images, other) from the site without asking is not cool. And using any creative work without crediting the creator will open you up to legal action. Respect copyright.