This past week we’ve reported on Caribbean poets Ishion Hutchinson and Kwame Dawes, both of Jamaica, winning the same lucrative literary prize; the broadcast of Angles of Light 2 ; and more good news for our community. But there’s even more great things like… 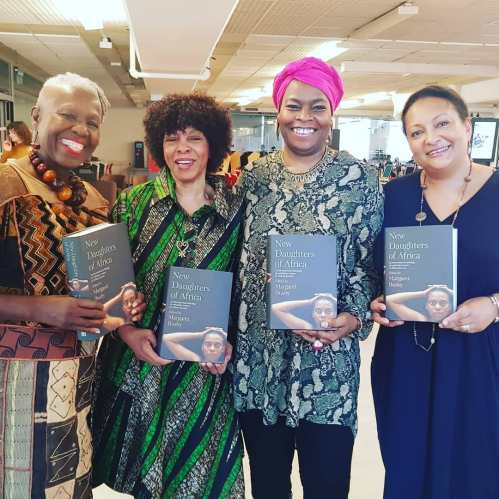 The release of New Daughters of Africa, which includes my story Evening Ritual and 199 other writers from across the African diaspora – some well known, some of us lesser known (or a lot less known) but all thrilled to be a part of a publication which follows 25 years on from the original Daughters of Africa. “New Daughters of Africa has been a truly collaborative venture: writers steered me in the direction of others whose work they admire. Altogether, more than 200 writers from more than 50 countries contributed work to the new anthology, from Margo Jefferson to Ayòbámi Adébáyò, Malorie Blackman to Yrsa Daley-Ward. New Daughters of Africa begins with some important entries from the 18th and 19th centuries – a reminder that later generations stand tall because of those who have gone before.” – from an article by editor Margaret Busby (second from left in the image above) in The (UK) Guardian. Here’s an excerpt from a review in The Irish Times: ‘A major theme throughout the anthology is restoring a history of African feminist lineage. “When someone says that feminism isn’t African, we are reminded that we do not have the historical proof to show how continuous our presence is on the continent,” writes Finnish-Nigerian journalist Minna Salami. Chimamanda Ngozi Adichie, another Nigerian and the celebrated author of Half of a Yellow Sun and Americanah, passionately describes her great-grandmother, who she is sure was a feminist, whether or not she used that word for it.’

The return of the Nobel Prize for Literature (which you’ll remember has been won by two recently departed Caribbean writers – Derek Walcott and V. S. Naipaul) announcing plans to announce two winners this year after taking a year to re-group. ‘In an effort to restore public confidence in the Nobel Prize for Literature, the academy has changed the system by which the Nobel Committee arrives at its decisions. The academy has appointed five independent external members to add a new perspective to the decision. The independent committee will participate in selecting Nobel laureates and submit its own joint proposal for the winner. The new system will be used to pick the 2018 and 2019 laureates. The foundation emphasized that the academy has “taken a number of important steps to deal with the problems that arose late in 2017, and more are planned.” According to the foundation’s release, “the organizational structure has been clarified and the Academy intends to practice greater openness, for example concerning its finances.” The academy also plans to study how to handle member expulsions in the future, as well as introducing time limitations on academy membership.’ – from an article in Publisher’s Weekly 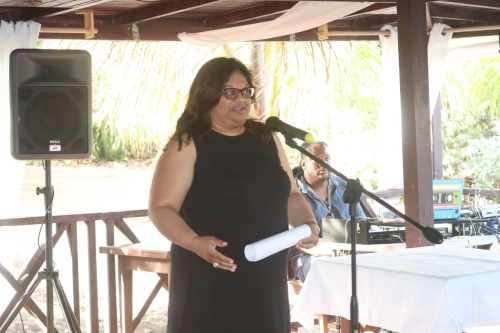 Ingrid Persaud reading from her book in progress at an event in Barbados in 2018.

News of a bidding war for the forthcoming novel of Trinidad born, Barbados and UK based writer, Ingrid Persaud, a recent winner of several major short fiction awards. ‘Faber has acquired the debut from BBC Short Story winner Ingrid Persaud to be a superlead for 2020 following a seven-publisher auction. Love After Love was described by Faber as “a major work of fiction”, to be published as a superlead for Faber, published in spring 2020. Louisa Joyner, editorial director at Faber, concluded a deal for UK and Commonwealth Rights to the debut following a seven-way auction with Zoë Waldie at Rogers, Coleridge and White (RCW) with Waldie securing several international deals ahead of the London Book Fair next week (12th-14th March) with deals with Gyldendal in Norway and Gyldendal in Denmark, offers in Italy and others expected shortly.’ – from thebookseller.com

As with all content on Wadadli Pen, except otherwise noted, this is written by Joanne C. Hillhouse (founder and coordinator of the Wadadli Youth Pen Prize, and author of The Boy from Willow Bend, Oh Gad!, Dancing Nude in the Moonlight 10th Anniversary Edition and Other Writings, Musical Youth, With Grace, and Lost! A Caribbean Sea Adventure). All rights reserved. Subscribe to this site to keep up with future updates.