The Big Three is Now Two

“Swallow bridged the musical vibrations across the Caribbean. … His legend is greater than the number of crowns, thanks to his enduring musical tracks.” – Trinidad Unified Calypsonians Organization in Trinidad and Tobago Newsday

Rupert ‘King  Swallow’ Philo is a Caribbean Sunshine Hall of Famer, associated in Antigua and Barbuda with the village of Willikies, the art form of calypso, and specifically de Road. King Swallow, one third of the iconic BIG THREE of Antiguan calypso, is, as of September 11th 2020, with the ancestors.

I have been fortunate to come of age in a time when the Big Three (other points in the triangle being King Obstinate and King Short Shirt) was at peak competitiveness – so, as a child, I got to see Swallow bring a space ship on stage for Party in Space, one of the images the theatre of calypso has seared in to  my memory. I got to hear big people argue about Swallow v Short Shirt v Obsti with heat and report how the winner could not even be announced on the night of because of the passion of the fans; my own house was split down the middle. I have been fortunate to interview Swallow and have shared multiple articles – e.g. Over the Boundary: the High Flying Swallow, King of the Road, Spotlight – Calypso Icon, Swallow  – on Swallow.  Maybe it’s a cliche to do this (especially since I think we don’t do nearly enough to reward our artistic icons for all the art they’ve blessed us with while they’re here – what permanent public record exists of the Big Three, for the children to see, for instance) but having just-just learned of his passing, how about I share some of his music.

“de music too sweeet” too sweet even for the judges who awarded ‘Satan’ Road March in 1984. Fun bit of trivia, in a symbolic passing of the torch, Swallow (who had previously won Road March in 1972, Pow Pow; 1973, Push Ya, Push Dey; 1975, Shake and Break Ya Bam Bam; 1983, Party in Space) would be the last of the Antigua-Barbuda calypso Road March winners before Burning Flames, who would become the new kings of the road took their first title with Stylie Tight in 1985, ushering in the era of the jam band that they themselves dominated. Before Flames though, the Road was Shorty, Latumba, Swallow, etc., and it sounded like this.

and his signature ‘Man to Man’

Swallow was not only the king of the road (soca king), he took the crown as king of the calypso stage  four times (in 1973 with March for Freedom and Push Ya, Push Dey; in 1977 with Dawn of a New Day and Jam Dem Back; in 1978 with One Love, One Hope, One Destiny and Wining; and 1985 with All is not Lost and Tong Mash Dung). 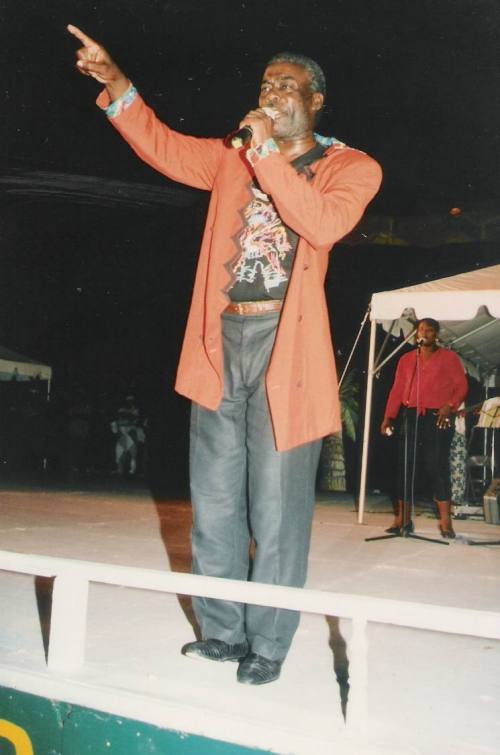 As with all content on Wadadli Pen, except otherwise noted, this is written by Joanne C. Hillhouse (author of The Boy from Willow Bend, Dancing Nude in the Moonlight, Musical Youth, With Grace, Lost! A Caribbean Sea Adventure/Perdida! Una Aventura en el Mar Caribe, and Oh Gad!). All Rights Reserved. If you enjoyed it, check out my page on WordPress, and/or Facebook, and help spread the word about Wadadli Pen and my books. You can also subscribe to the site to keep up with future updates. Thanks.

Filed under A & B Lit News Plus, A & B WRITINGS, Caribbean Plus Lit News