Sample Saturday: Away From Home

This post is inspired by Booker Talk’s Sample Saturday: Around the World Post. I thought I’d do it while waiting for my computer to do things. Flipping it to books written by Antiguans and Barbudans (citizens and/or residents) set Away from Home (i.e. not set in Antigua and Barbuda). Fiction, obviously. I’m sure I can find three. Fingers crossed.

London Rocks by Brenda Lee Browne – This is the story of Dante Brookes, a young man growing up in London in the late seventies and early eighties when sound systems ruled the party scene for young, Black British youth of Caribbean heritage. He navigates the loss of friends, police harassment and being a teenage father while forging a career as an MC. Dante stumbles into the acting profession and also becomes a writer. It is through these disparate experiences that he learns that the pen and mic at mightier than the sword.

I do think this is one of those books that should have gotten more notice than it did. I explained why in my review.

Verdict: Definitely check it out.

Considering Venus by D. Gisele Isaac – This explores the almost-unacknowledged issue of lesbianism among Caribbean women and adds to it the complication of a heterosexual perspective.  It asks, “What happens when girlfriends becomes more than friends?”

Though the characters visit Antigua, the book, if I’m remembering correctly, is primarily set in the US (the Northeast US, I believe) where the author was resident at the time.

Verdict: Breaking taboos way ahead of the curve (it came out in the late 1990s); a timely classic. Get it.

Unburnable by Marie Elena John – Haunted by scandal and secrets, Lillian Baptiste fled Dominica when she was fourteen after discovering she was the daughter of Iris, the half-crazy woman whose life was told of in chanté mas songs sung during Carnival—songs about a village on a mountaintop littered with secrets, masquerades that supposedly fly and wreak havoc, and a man who suddenly and mysteriously dropped dead. After twenty years away, Lillian returns to her native island to face the demons of her past.

Of course, there are a fair number of Antiguans who will say Dominica (the French/English Caribbean republic – not the Spanish country that takes up half of Hispaniola) doesn’t count, so intertwined are our families, but it is technically Away.

That’s my three. I started scrolling through the Antigua and Barbuda Fiction List and hit three books I’d read and liked that were set Away before even getting to Jamaica Kincaid (take your pick, Lucy – NY or See Now Then – Vermont), or having to pull the books with only a few scenes Away (like my own Dancing Nude in the Moonlight – Dominican Republic), or hit the children’s book (Rachel Collis’ Emerald Isle of Adventure says it’s set in Montserrat right there in the title).

As with all content on wadadlipen.wordpress.com, except otherwise noted, this is written by Joanne C. Hillhouse (author of The Boy from Willow Bend, Dancing Nude in the Moonlight 10th Anniversary Edition and Other Writings, Oh Gad!, Musical Youth, With Grace, and Lost! A Caribbean Sea Adventure). All Rights Reserved. If you enjoyed it, check out my page on WordPress, and/or Facebook, and help spread the word about Wadadli Pen and my books. You can also subscribe to the site to keep up with future updates. Thanks.

Filed under A & B Lit News Plus, A & B WRITINGS, Links We Love, Literary Gallery

Courtesy the US Embassy Bridgetown, concerning the presentation this Thursday 25th September, 6 p.m. by Brooklyn Poet Laureate, Tina Chang, at the Antigua State College. This is a bit more about the poet, plus interesting insight re the role of the poet laureate, and your late day reminder about the event. 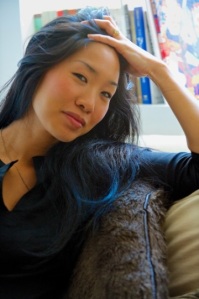 For Brooklyn Poet Laureate Tina Chang, poetry is not “lofty.” As a matter of fact, one of her chief goals is to “demystify the role of the poet.”

Of Chinese descent and raised in New York City, Ms. Chang is the first woman to be named the Poet Laureate of Brooklyn. But what exactly is a Poet Laureate? A poet laureate is a poet officially appointed by a government or conferring institution. Laureates receive a stipend and are given the responsibility of overseeing an ongoing series of poetry readings and lectures, as well as a charge to promote poetry. Ms. Chang said that as the Brooklyn Poet Laureate, she wants to create a website spotlighting other borough poets.

Her interest in poetry began from a very early age. Born in Oklahoma to Chinese immigrants, Ms. Chang moved to New York when she was a year old, so her father could be treated for liver cancer at Memorial Sloan-Kettering Cancer Center. “I started questioning even at a very young age, well, what is language?” she said. “What is the role of words?”

After pursuing a string of English-related jobs, Ms. Chang enrolled in a master of fine arts program in poetry at Columbia in 1995. Her first book “Half-Lit Houses,” a collection of poems tracing the life of a girl who loses her father back to Hunan, China in the 1930s and ’40s, was published in 2004. She is also the author of the poetry collection “Of Gods & Strangers.” Ms. Chang has received awards from the Academy of American Poets, the Barbara Deming Memorial Fund, the Ludwig Vogelstein Foundation, the New York Foundation for the Arts, Poets & Writers, and the Van Lier Foundation among others.

She currently teaches poetry at Sarah Lawrence College and is an international faculty member at the City University at Hong Kong.

U.S. Embassy Bridgetown is pleased to host the Brooklyn, New York’s Poet Laureate Tina Chang from September 25- 27, 2014 on a three-island tour of Antigua, Barbados, and St. Vincent and the Grenadines.

Ms. Chang will showcase her poetry during evening public events, which will highlight the diversity and modernity of American literature, as well as allow her to share her opinions on poetry’s relevance and give insight on her creative process.

This series of public readings will also help the U.S. Embassy recruit candidates for the International Writers’ program (IWP), the Department of State’s premier exchange program for creative writers.