Tag Archives: what if

So a publication asked me to submit a piece on writing tailored to kids to coincide with the release of Fish Outta Water. I was stumped but decided to give it a go. Just as I was submitting it, though, they said, never mind. Seems I’d missed the deadline I hadn’t been informed about. Needless to say I was pissed because time is not something I have a lot of; but then I remembered I have this blog for sharing things like this (and hadn’t had time to blog all week). So I won’t count it as time wasted but as the blog I didn’t know I was going to write. And you know what’d be really cool: if kids, especially kids 10 and younger, responded with their own response to the what if prompt in the comments section below.

How to Write Your Own Adventure

That question can send the imagination on an exciting adventure.

What if an Arctic seal got lost in the Caribbean? 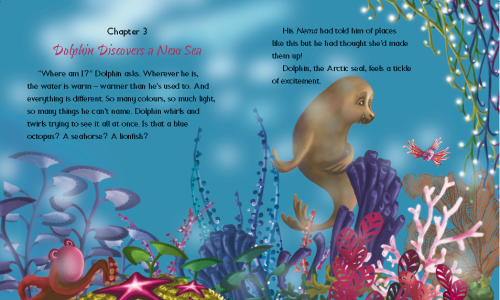 In the real world, we learned that this is not such a far-fetched what if when Wadadli, the Arctic seal, was helped home by scientists after somehow ending up in our waters.

For each question, I imagined answers until the world of the story was filled with characters; and how the seal got lost to how he got home became the challenge driving the plot, as surely as the growing friendship between the adventurous twosome.

As for the world of the story, before the illustrator (Zavian Archibald) could draw it, I had to imagine it. I refreshed memories of being on or under the water with online images of our vibrant Caribbean underwater life and the creatures that inhabit it. Plus, I found inspiration in unexpected places, like watching the sway of grass in a brisk breeze as I tried to write the fluid world of the sea.

Because it’s the world of your imagination, you can bend the rules. So yes, the seal and other sea creatures in Fish Outta Water do talk, just like Nemo.

As for how it feels to be lost, to make new friends or to go on adventures, I have only to search my own experiences; and use the echo of those emotions to imagine how the characters might feel.

Of course, in the story, the adventure eventually comes to an end. To find out if the seal who daydreams of dolphins finds his way home, you’ll have to read the story; I don’t want to spoil it for you.

But, know this, you too can write your stories; your story can take anything on any kind of adventure. You only have to ask yourself, what if?

Filed under A & B Lit News Plus, A & B WRITINGS